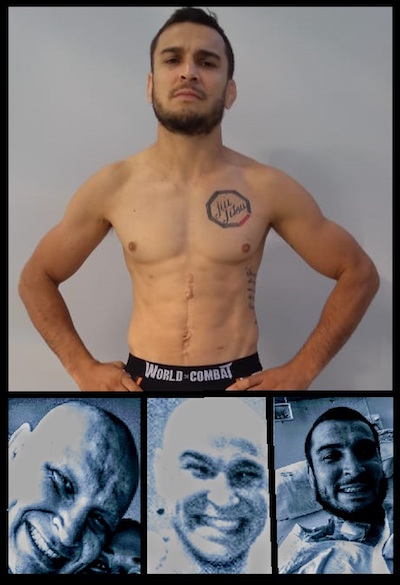 Bruno Ferreira may be the ultimate underdog… or maybe the ultimate comeback…. oh no, he is both. Bruno Ferreira has not fought MMA in three years, he had to take some time off his MMA career to kick cancer’s ass. Bruno was diagnosed with cancer three years ago, and has been cancer free for over year now. He has finished all of his MMA opponents in the first round, and even though it took him a little longer to TKO cancer, Bruno emerged victorious. He will be living his dream and fighting for the first time post-cancer in August for M-1 Global USA in Nashville, Tenn. We talked with Bruno about his past fighting experiencing, his life changing ordeal and his return to professional mixed martial arts competition.

Why did you get into Martial Arts?

Since I was a child, I have always enjoyed sports, I was even more interested in martial arts. Karate initially, because I was always a small, thin child, was a way to feel more secure.

Could you tell us a little about your pro MMA career?

My jiu jitsu teacher who is also a MMA fighter, Paulo Surian, invited me to make a challenge fight without any awards, I accepted and feft with the victory, since then I fell in love with the sport. After this fight I participated in an amateur event (with pads/headgear and shorter duration) and unfortunately I was defeated, but that did not shake me. I dedicated myself even more to the training, thus starting out for the professional MMA, conquering five victories fighting in my city, São José do rio Pardo. To try to live the fight, in search of training and greater opportunities, I moved to Campinas in the academy of Mestre Marcelo Ferreira. Achieving three more victories, in which the opponents were fighters of great teams, ending all eight fights with first round victories.

You signed with Legacy, and found out that you had cancer the same week. Could you tell us about this experience?

Was in great rhythm of training, then my impresario obtained the contract with the Legacy. About a month or so before I began to feel some pains in the lumbar region, after some tests I was told to be a kidney problem, but the pains were increasing, so I got a more detailed examination to know the reason for so much pain, so we discovered the cancer. … I went from heaven to hell at that time, I was feeling professionally accomplished with the Legacy fight is a big event when the illness came and made all my dreams crumble. Cancer is a scary disease, my thinking was that death would be next.

When you found out that you had cancer, did you think you would ever fight MMA again?

I thought I would never fight again, I actually thought I was going to die soon, going into depression crying a lot every day. Until my wife Susana Jacob had a serious heart to heart, who told me we’ll all die, you have to live one day at a time, that everything will pass, just as the happiness is gone, the sadness would also. Thank God I’m alive.

Did you Martial Arts lifestyle help you deal with the cancer?

Yes it helped a lot, the fight makes us stronger both in the cage and in life.even during the treatment, which is horrible, so I felt a little better put on my kimono and went to the gym to teach and train, of course in much smaller intensity, because I did not have the strength or the breath to stand. Because I was on the mat I already felt alive and strong to continue fighting cancer. These training sessions did not let the flame fade inside me. I am grateful to God for putting me in the martial arts.

How was your attitude when going through the cancer treatment?

I initially became very depressed, it was difficult not to be able to eat, only thinning, without strength, a sadness that did not end, often thinking that I would die during the treatment. I did several sessions of chemotherapy and three surgeries, which left me very weak.

How did you stay positive when going through the cancer treatment?

Faith was my foundation throughout the treatment. Even with all sorrow it kept me standing, because deep down I knew I had the strength to pass this phase, I wanted to live. Often I did not show weakness so not to discourage those who were on my side, father, mother, wife, brothers, in-laws and friends.

When did you start thinking about training for another pro MMA fight, after cancer?

As I said I was always training during the treatment at a much lower rate, but with the end of the treatment I increased the intensity of the training, but my whole return was in October 2017, when I returned to train specific to MMA in Campinas, Black Sheep, with Otavio Carneiro.

Could you please tell us about your first day of training after cancer? How hard was it to deal with pro MMA training?

To return to intense training was difficult, because I lost the training rhythm and my training partners had evolved a lot during the time I was absent. What subsequently became a positive point, after all the training was strong and so I was able to evolvevery fast .. after illness I started a more restricted diet which helped me a lot.

You have signed with M-1 and fighting in August. What do you think about fighting in USA for M-1?

Fighting in the USA has always been my dream, but fighting in M-1 will be even better, a happiness that does not fit inside me.

You are fighting a very tough Tony Gravely, what do you think about your opponent?

A good opponent with a great camp, I’m glad he agreed to fight me.

Is there any advice for anyone that is going through the cancer treatment you went through?

Never lose faith in GOD, because to Him nothing is impossible. Always live one day at a time and never fail to believe in your victory. and something I’ve learned too is that healthy eating is essential to life.

Today if I am alive it is thanks to GOD, I am very grateful to Him for my life, and I am every day trying to learn more about Him. my wife, mother, father, family brothers and friends (for every prayer, comfort word, and help anyway). To all the doctors who helped me. To Wade Hampel of Big Fight Management for continuing to believe in me and help me realize my dream. My Professors Paulo, Marcelão, Otavio, German, Fat and my training partners and my students. My gym where I shot my sponsorship for the workouts, BodyAction-Fitness Academy and Martial Arts Thank you very much and may God bless each one of you.