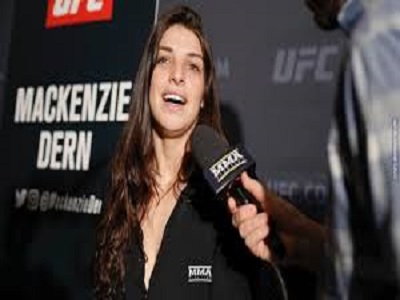 In her last attempt to make the 115 pound limit of strawweight she missed the mark by 7 pounds. That is an astounding misstep and an oddly impressive achievement to weigh in that far over the limit. The UFC asked her to step up a weight class because this was the third time in seven fights that she missed her mark. Unbelievably she refused and is staying at strawweight as she told Combate (via MMAmania),

After I did not hit the weight, the UFC called me. They said they were thinking of moving me up, they called me to come to the Performance Institute in Las Vegas to see what my body type was like, if it was better continue at strawweight or move up to flyweight. Having this network is so great, seeing them invest time in me and helping me, I had no way of saying no. I’m here getting their help on everything…Everyone here agrees I have a body type that fits at strawweight, in the category that I am, so the plan is to continue in it,” she said. “But we want to diet and train so that I do not have to cut so much weight, I’ll cut very little. After the fight, I will not go up that much. Regardless of what will be decided on the weigh-in, whether or not it will return for the afternoon, it will not change my situation much, because, the way they want me to be the best possible athlete, it will be a very quiet thing.

Dern needs to do the MMA world a favor and not end up having health issues like some who struggle to make weight do. She is talented, skilled, and driven and that is a rare combination in some divisions.