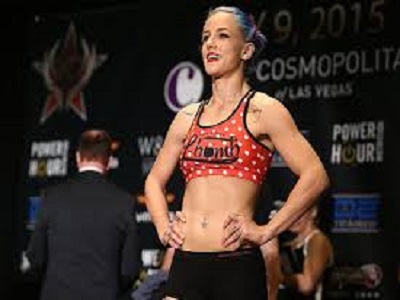 Jessica-Rose Clark competes in the UFC’s flyweight division and is a genuinely sweet person so when she spoke out harshly against the UFC signing Greg Hardy fans paid attention. Hardy was convicted of domestic violence and was punished for it until the accuser did not show up to a court date. It is believed they worked out a settlement quietly. Still, he is not welcome by some including ‘Jessie Jess’ who is herself a domestic violence victim. Here’s what she said (via MMAFighting) on the Phonebooth Fighting podcast…

I don’t believe people like that change…They gave him (Hardy) his second chance, and I’m a firm believer that someone who is capable of going as far as he went with me – and I know he’s been further with other women before I met him – he’s not going to change. He can do all the convincing and all the lying in the world, and he can convince you that he’s a really good person. But who he is at his core is someone who’s capable and willing to do stuff like that.

…Unfortunately, athletic ability seems to excuse any kind of behavior. Indeed, Dana White claimed that Hardy is a “great guy”, was never convicted (he was) and Hardy seemed to regard White as an “angel” for giving him a second chance.

Athletic ability seems to supersede any negative thing you do in your life. You see it time and time again, like Kobe Bryant. It happens so often, and it blows my mind that that’s where our society is at. That like, ‘Oh, he did all these really terrible things, but he’s an amazing athlete, so (expletive) it, let’s just let him keep going and keep making his millions and keep being on TV.’ There’s no punishment.

In the age of social media, it’s hard for people to care about it, because whether you react negatively or positively to something, now with social media and how quickly people have access to that, you get an immediate feedback. So it’s like drinking or taking drugs – you say something, you get a reaction straight away, which is what I think people crave. So there’s no need to look into anything further, because you’re getting that quick fix all the time.

In Jessica’s case her attacker ended up getting KTFO’d during the fighting, and was still charged accordingly, rightfully so. Domestic violence should never be tolerated but does it condemn a man for life?

What do you think? Should Hardy have been given the opportunity he was afforded?

Check out the injuries she sustained that the website Deadspin posted of his victim’s injuries.