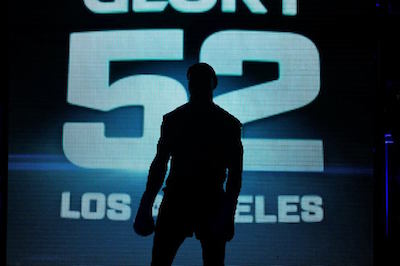 Los Angeles, Ca. On March 31st, GLORY Kickboxing returned to Los Angeles at the Long Beach Arena in the Pacific Ballroom through its 52nd edition with a crowd capacity of thousands who patiently anticipated the arrival of its evening’s main fight title card.

What makes Glory and its fight promotions such a successful fight brand set among a descending contrast of Fakenews with its transparency as the last value of postmodern authenticity? You ask how can truth and great promotion survive in a media saturated society where its culture of entertainment no longer values verifiable facts just deceptive lies? No institution has been more plagued by this dilemma than this generation’s news media. In recent times, the media has been stumped with a tremendous amount of ire and skepticism that now we as its audience must fight against exploitation by ready for hire politicians…

In 2016 media learned through its defeat that journalism is in danger of being overwhelmed by crooked politicians and a new age of revolutionary communication, which only accelerates the spread of lies, misinformation and questionable claims.

Glory’s success was dependent on its well presented fight promotion with an authentic narrative and its fatal mission to give reigning featherweight champion Robin van Roosmalen the chance to unify the belt against interim titleholder Kevin VanNostrand. By the end of evening after an intense war, GLORY 52 named Robin van Roosmalen as its newest featherweight champion. The Dutchman was crowned champion through his relentless stalking and sadistic body punching campaign in beating Kevin VanNostrand as our allegory.

Wait For It was the mise en sceme expression, used to build up its match’s promotional suspense in anticipation of a Glorious evening and Weight For It was the lesson as its key.

It was the very talented Netherland Fighter van Roosmalen who won four consecutive victories resulting from dropping from the lightweight weight class in 2016. New York maybe a “Helluva town” but VanNostrand who picked up five straight wins from six GLORY appearances could not contend with the Dutchman’s brutal strength and strategy.

An additional match on the main card was the middleweight fight between American kickboxers Paul “The Reaper” Banasiak and Troy Jones.

The middleweight match between Banasiak and Jones was turned over to the judges where its fate was held in the balance returned by its arbiters with a unanimous decision in favor of Troy Jones.

At Glory 52 in Los Angeles, Jones signed his signature mark with his professional kickboxing debut and promotional debut now standing as a 1 win and no loss record.