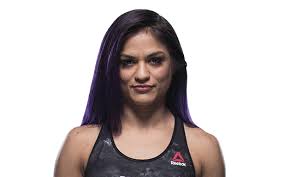 UFC strawweight Cynthia Calvillo was flagged by USADA when she tested positive for marijuana metabolites. This came after her UFC 219 defeat at the hands Carla Esparza last December. She was suspended for six months but there may be a silver lining.

Reportedly, if she completes a USADA backed drug awareness program it may cut her time down. Since her suspension is retroactive to the December bout it looks promising she will be fighting later this year if everything falls in to place.

Are you excited for her return?