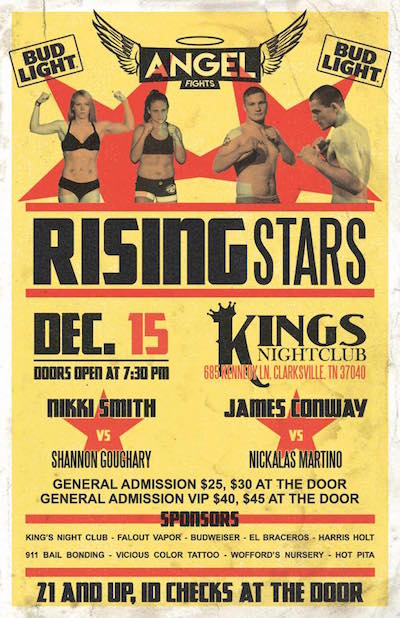 The main event saw Dickson’s James Conway knockout North Carolina welterweight Nick Martino in the first round in what was his professional debut. It was a great showcase for the young upstart and helped solidify Warriors Den MMA Academy in Dickson as yet another force in Tennessee for developing legitimate professional mixed martial arts talent.

Nashville MMA’s Shannon Goughary made a successful professional debut in the co-main event by submitting Bellator vet Nikki Smith out of Illinois. With coaches Shawn Hammonds, Chris Beasley and Lance Patrick in her corner, one can add Goughary’s name to the list of quality talent coming out of the now legendary Nashville MMA facility.

Also, local welterweights Irvin Jones and Dwayne Herelle put their friendship on hold to make a payday inside the cage. The two went back-and-forth for three rounds with Jones using cage control and effective grappling to get the unanimous decision nod.

It was another quality event from Angel Fights at Kings Nightclub and the promotion has big things planned for 2018 in an exclusive partnership with legendary Russian based MMA promotion M-1 Global. Stay tuned for details on their next event.

Here are the full results from the “Rising Stars” event.

Check back as we’ll post the videos once they are edited and released.