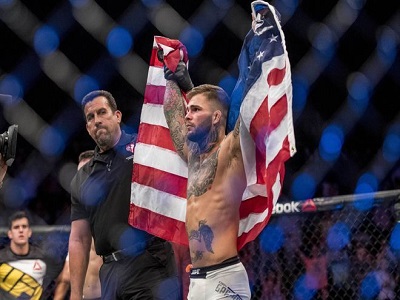 It got real when UFC bantamweight champ Cody Garbrandt and future opponent Aljamain Sterling beefed on Twitter.  He called Aljamain a “boy” which is significant because the word’s history has been used by racists for a very long time to describe African Americans. Needless to say the internet and Sterling himself accused Cody of being just that. The UFC champ headed to the The MMA Hour and gave his side of the story about the comment.

“I don’t like that guy…He got all mad because over a year ago I told him that he was overrated. So the guy starts running his mouth and I see a TMZ report that he said he was going to kill me. So I was like, ‘Oh you’re going to kill me?’ “

“So I took a screen shot and I sent it to him in a DM and he acted like a little bitch and that’s what he is…I should have called him a little bitch, not ‘boy’, I didn’t know that it was politically incorrect. I got a shirt that says ‘Hanging with the boys’, I call everybody ‘boy’. You know, ‘what’s up, boy’, I didn’t know that it was politically incorrect…I am not in the least bit racist. I have a sister that’s married to a black guy. I have a niece that is a mixed (race) child…For him to go out there and try to ride off that fame, I told that fool that the next time I see him I’m going to f*ck him up.”

It was this comment that has everyone talking now.

“Next time I see him he better have his hands up.”