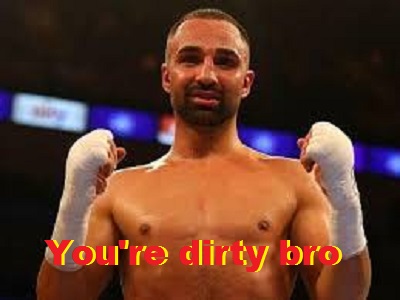 On “The Herd with Colin Cowherd” former McGregor sparring partner Paulie Malignaggi revealed that Conor McGregor is technically a dirty boxer. He also firmly believes that Conor is in big trouble if any of those bad habits surface in his August 26th bout with Floyd Mayweather Jr.

One thing Conor has to understand, and you see that in that clip that they sent out.  It wasn’t so much that he’s landing shots because most of the shots are missing. If anything, they’ve shot themselves in the foot because all the dirty stuff he does that the referee will actually warn him for. In that particular sparring session, there’s no judges, but he lost two points from that particular sparring session for fouls, for rabbit punching and hitting behind the head and pushing behind the head.

What he really has to learn is to try to keep it within the rules because he’s a little bit confused as to what he’s doing in there. He’s a little bit confused, especially on the inside as you can see on that tape. He’s trying to grab and push the head down. Inside fighting in boxing is very different from inside fighting in mixed martial arts. You can’t grab. You actually have to know what you’re doing on the inside.

If this is true then it would surprise absolutely nobody to steal a Conor McGregor catch phrase. MMA is a different animal and the rules are probably more lenient because of the grappling aspect. A shot to the back of the head is not uncommon because of how many twists and and turns the body makes while jockeying for position. Sometimes the refs see it and sometimes the fighter receiving the shots may even get the blame for turning away. However, if McGregor tries those in his bout with Mayweather a disqualification may spoil the hyped bout.