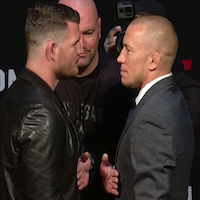 UFC middleweight king Michael Bisping was supposed to be fighting someone at some point at the beginning of the summer. Then he announced he was having knee surgery and it messed up plans for a defense. Shortly after this his rumored opponent at that time, and killer Yoel Romero said he planned on waiting for his title shot. Suddenly, GSP appeared and before you know it the fight between Georges St. Pierre and Michael was on – and then it wasn’t.

GSP was all in for a late summer bout and hype was building, they made the match, and then…St. Pierre said it would be November until he could fight. Bisping agreed to wait and the entire middleweight division called BS and demanded at least an interim title. Now, Michael has stirred the pot even more by wanting someone else to face Yoel.

I’m assuming that they’re probably gonna do an interim title fight but I’ve got to speak to Dana. . . Probably Whittaker vs. Yoel, if I were the matchmakers, that’s what I’d do. Whittaker, we all know this, he’s on an absolute tear. I’ve got nothing against Robert Whittaker. Fine young man, great fighter, fights hard, got a lot of respect for him. Can’t say the same about Yoel. Yoel is certainly not on my Christmas card list. We all know my thoughts on him. He’s a scumbag, he’s a cheat, and that’s that. So if they do fight, I hope Whittaker beats the brains out of him.

At this point, Bisping has no ground to stand on when it comes to advising Dana on any title decisions. Fighting an aging, shell of his former self Dan Henderson was gratifying in terms of Bisping’s revenge, but there were deserving middleweights waiting. GSP is a welterweight and it is obvious that Michael wants big money and GSP believes he can beat him. None of this relieves the pressure at the top of the division.

Bisping needs to defend it against a number one or two opponent or vacate the title. If not, at the least they need an interim until he is healed or willing to fight them.