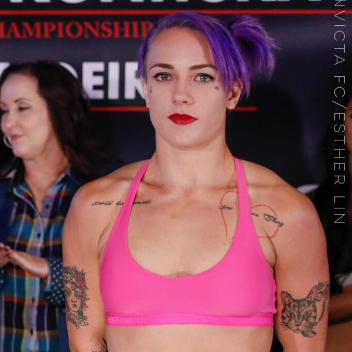 Jessica Rose-Clark is a pro MMA fighter from Australia. She holds a record of 6-4, with wins over the likes of top featherweight Arlene Blencowe. Rose-Clark recently faced former world champion Sarah Kaufman, despite having some good moments she couldn’t get the nod from the judges. She recently took some time to talk with me about her career, recent problems she faced in her relationship, denied payment by Battlefield Fighting Championships and more.

What got you into MMA? Who was your influence? What is your combat sport background? How does it feel to achieve so much at such a young age?

I started kickboxing with an ex as a way to cut weight for a powerlifting competition and from day 1 I was hooked. I was 22 at the time with no other martial arts or combat experience.

I only surround myself with people who support the decisions I make. Not everyone has to but I just choose not to spend my time with those who don’t. I haven’t faced many big challenges, aside from actually fighting.

You for the first time in your career are on a losing streak. Has it affected your confidence? How do you usually deal with losses?

Yeah I’m on a 2 fight losing streak and it sucks! Especially cos my losses are decisions which just means I haven’t been doing enough to win those fights. It hasn’t affected my confidence. I just want to take more tough fights and keep doing what I do.

You recently went through a case of domestic violence. How have the series of events affected you? A lot of women choose to remain silent when they face such abuses by their other half. Why do you think this happens? What is your message for every woman who faces such problems?

Most women and men who have been on the receiving end of domestic violence, don’t like to come forward or open up about it either because of fear or repercussions or feeling ashamed. I’ve felt both of those things. Even if you don’t want to be completely public about it, there are ways you can speak about it and remain anonymous. All counseling hotlines and police stations can provide you with that.

Sarah was a great opponent. My performance sucked. I hope I get the chance to face her again cos I for sure should have done things differently.

You recently posted on social media that you have not been paid for your fight. Have you been paid now? What was the promotion’s response? This problem has been faced by many MMA fighters. What do you think is a solution to all of this?

I haven’t been paid yet. I don’t know what the solution is. It’s hard to force someone to pay, especially if you’re in different countries. I just keep hoping that they are gonna come through with it soon.

What are your next plans? Whom would you want to face?

I have a few things in the works. It’s all dependent on how the next 2 months pan out really.

I changed my name on Facebook to stop an ex from being about to find me and then Jessy Jess just kinda stuck.

I don’t understand why so many people complain about fighter pay. Yeah it would be nice to get paid more, and as people perform better and do ALL parts of their job, not just fighting, then they will get paid more. Until then, STFU and put in the hard yards. You chose this industry knowing that the chances of becoming wealthy are minimal. Stop complaining and start working for it.