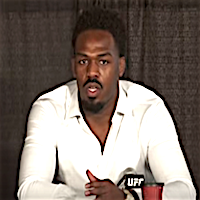 Former UFC light heavyweight champ and the man most considered the number one pound-for-pound mixed martial artist on the planet, Jon “Bones” Jones, held a press conference in New York last week in conjunction with UFC 210. Jones has been on the sidelines serving out a 1-year suspension for banned substances apparently linked to a male enhancement supplement. Jones will be eligible to return in July and hopefully we’ll see him back in action soon and fighting Daniel Cormier for the title. Here’s the full video of the presser.