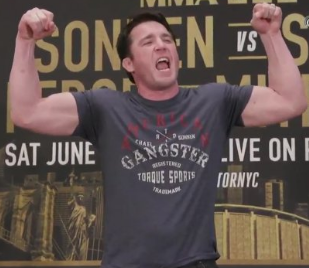 Bellator held a press conference Tuesday for their upcoming pay-per-view card scheduled for Madison Square Garden in NYC on June 24. Chael Sonnen and Wanderlei Silva will meet at light heavyweight in the main event, while Fedor Emelianenko vs. Matt Mitrione will co-headline. Sonnen “The Bad Guy” was in full effect at the presser and sold the show, not only promoting himself, but other fighters and the promotion as a whole. He’s a great mouthpiece and associate for Bellator. How he will fight against Wand is another matter and his performance against Tito Ortiz doesn’t inspire a lot of confidence. Though who knows what to expect against Wanderlei who we haven’t seen in action since a knockout win over Brian Stann in 2013. It should be fun. Now watch Sonnen and Wand go back and forth at the presser.