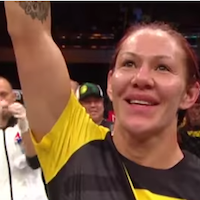 Germaine de Randamie is the first ever UFC women’s featherweight champion after beating Holly Holm at UFC 208. Germaine landed strikes after the bell and this prompted Holm’s camp to request a review of the bout since strikes after the bell could get points deducted from the offender. The outcome could have been that Holly was champ and not de Randamie. Germaine took to social media with the following post after the protests became public.

I want to say that it was a heated battle with lots of emotion, but I am not a dirty fighter. I have always trained to fight to the end or until the referee steps in. Never did I punch around or over the referee to deliver a cheap shot on Holly. I have nothing but respect for Holly and the UFC, and because of that I want to say right now that I think I owe it to Holly and the fans to do this fight again to make sure that the winner of this historic belt is crystal clear. Holly let’s do this again.

Fellow featherweight Cris Cyborg is the most feared women’s featherweight in MMA history unless someone can prove me wrong. She has made it clear she wants de Randamie at UFC 212 Brazil in June and fans for the most part when the topic comes up. Cyborg doesn’t feel Holm deserves a return bout and she made that apparent to the MMA Hour.