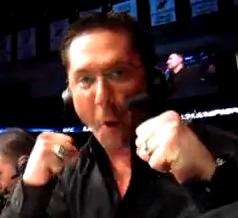 The voice of the UFC to many was play-by-play commentator Mike Goldberg. “It is allll over” and “reign supreme” are just a couple of his famous quotes and he will be missed.

Goldberg was released after UFC 207 with no fanfare at all from the UFC despite his years of dedication.  Fans and fighters alike were not too happy about the exclusion of a proper sendoff.   Mike took to Twitter to address everyone.

I wish I could respond to every single fan, fighter and member of the media who reached out and showed their support, gratitude, and appreciation.It has been overwhelming and so gratifying! Thank you!! Every single UFC, from Ultimate Japan to UFC 207, my primary focus has been on just 2 things! First, to bring passion, energy and raw emotion to our fans around the world, dedicated, diehard fans like none other! Second, to properly represent each and every fighter, from UFC newcomer to veterans with 20 plus Octagon battles, our fighters work so hard and sacrifice so much it was my responsibility to properly prepare and tell their stories!! And just for the record, I still believe that Anderson Silva’s Precision is Precise.