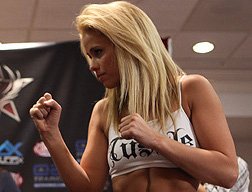 Fox’s Saturday UFC broadcast of UFC on Fox: VanZant vs. Waterson that emanated from Sacramento averaged a solid 3.2 million viewers for the entire show. That’s 3.2 for the whole show which is pretty darn good. The FOX broadcast peaked at an impressive 4.8 million viewers. The peak numbers occurred during Michelle Waterson and Paige VanZant’s clash that saw Waterson unexpectedly submitting Paige for the win.

UFC shows on Fox have been drawing fewer numbers than that unless they were headlined by a marquee bout. Back in April 2013, when Benson Henderson defeated Gilbert Melendez, the numbers were solid for that show, but other than that they have been average. VanZant was on Dancing With the Stars and Mickey Gall defeated Sage Northcutt on the card. Seeing Gall, the man who crushed CM Punk’s UFC dreams, in a second fight might have played in to the numbers. It also didn’t hurt that the card featured Urijah Faber’s retirement bout.

There’s something about them and they have that star quality where people are interested in seeing them Sage is ripped and is an unbelievable physical specimen. Mickey was on the show and then he fought CM Punk and Paige had that exposure on ‘Dancing with the Stars.’ If you get out there and promote yourself, this shows you that you have a chance.

Next up, the big one. UFC 207 takes place on December 30 and features a returning Ronda Rousey vs. current women’s bantamweight champion Amanda Nunes.