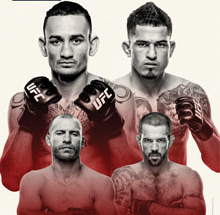 Anthony Pettis came in a staggering three pounds overweight during this morning’s weigh-ins for UFC 206. The kicker is this is for the interim Featherweight title!  Their bout will take place in Toronto, Ontario, Canada.

Holloway was quick to karate kick his keyboard and pretty much say what we were all thinking.

1/2 like i said before we professionals and our first job is to make weight. This isn’t about just me and my team it’s about the fans

3lbs is a lot to miss but the guy was trying and I respect that. At the end of the day it is what it is.

The PPV is set for the Air Canada Centre on Saturday December 10. In a messed up situation now, Holloway can win the belt, but since Pettis missed weight he cannot. This could be a lose-lose for the UFC if Pettis wins. Holloway loses his shot and a guy who missed weight wins a bout that has zero meaning. Unless the UFC gives Pettis a shot at Jose Aldo who we can all agree will have a “you didn’t earn this shot” field day on Twitter once it is announced.