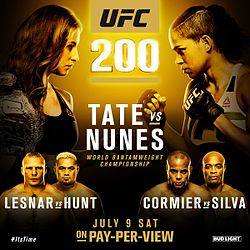 We’ve got probably the most stacked head-to-toe card the Ultimate Fighting Championship has ever put together taking place tonight in Las Vegas. UFC 200 features Miesha Tate making her first bantamweight title defense against challenger Amanda Nunes in the main event. Brock Lesnar returns against Mark Hunt in the co-headliner, Cormier vs. Anderson, Aldo vs. Edgar, Velasquez vs. Browne — and that’s just the PPV card!

Pro MMA Now (www.prommanow.com) will provide live results and round-by-round updates of all the UFC 200 action kicking off with the early Fight Pass prelims at 6 p.m. ET, moving to the Fox Sports 1 prelims at 8 p.m. ET, and the PPV card at 10 p.m. ET (which you can order online here).

Round 1 – Interesting yellow canvas tonight. Miller gets Gomi’s back full body triangle looking for the choke 1:30 into the match. Miller flattens him out and drops a ton of bombs, Gomi covers up, and the ref stops it.

Round 1 – Mousasi hurts Santos with punches about midway through the round, gets him down and takes side mount. Mousasi tries to advance but Santos’s guard was too good. Santos works his way to his feet but gets knocked out straight away with an uppercut on the way up followed by a couple more to shut em down.

Round 1 – Man I just saw Diego Sanchez take way too many punches before the fight was stopped. It looked like Joe KO’d him about two or three times on the feet before the ref had seen enough. Hard to watch. On the positive side, Joe’s boxing looked really good and he became the first to stop Diego with strikes.

Round 1 – Sage lands some good punches and a head kick during the first half of the round. Marin finally pins him to the cage and gets a takedown. Sage goes for a leglock and ends up on top. Marin eventually gets back up but Sage gets him down again, lands some punches, but ends up on bottom at the end of the round. 10-9 Sage

Round 2 – Marin gets a takedown and looks for a armbar at the 2:54 mark. He stretches it SOOO tight and eats a nasty nasty elbow, but fights through the submission and ends up on top. His arm could very well be injured. Marin is able to get a reversal and ends back up in top control in North-South, looks for a kimura, cranking it even harder, switches to the same armbar attempt again but Sage reverses and is on top dropping elbows at the bell. Marin 10-9

Round 3 – Sage gets lit up with a one two from Enrique. He’s still in there though. Marin pins him to the cage and works hard trying to get a takedown. Sage opens him up with elbows but gets taken down himself. Sage is able to roll and take top control where he lands some nice punches and elbows before the bell. 10-9 Sage

Round 1 – Some nice exchanges in round one, both guys landing some nice combos. TJ landed a couple high kicks, while Assuncao landed a couple big knees upstairs. Both guys are looking for that one mistake that will let them finish the fight. Close round but give the edge to TJ 10-9.

Round 2 – Hard lunging right from TJ that snaps Assuncao’s head sideways. He seems okay though it was a perfect shot. TJ of course using a lot of switchstance footwork back and forth. Perfectly timed takedown from Assuncao but TJ is right up. Assuncao’s nose is busted up and bleeding badly. Ref lets the Dr. check him out but he’s fine. TJ drops him with a punch but he’s back up with 30 seconds to go. TJ lands a couple more shots before the bell. 10-9 TJ

Round 3 – Assuncao stuffs a takedown as TJ continues to outpoint him on the feet. TJ’s looking for the finish but it hasn’t yet presented itself. TJ times a takedown in the last minute of the round. Raphael gets up pretty quick with about 20 seconds to go. They dance it out. 10-9 TJ

Round 1 – Kelvin comes out aggressive ready to bang. Kelvin with a nice left over the top, landing some nice leg kicks. Hendricks don’t like it. Another big left from Kelvin. Johny is doing nothing but trying to get inside. He finally lands a couple but can’t stay inside. Uppercut from Johny. Kelvin touching him up now with punches, Johny with no defense to speak of while getting tee’d off on. Finally Johny pushes him to the cage to halt the assault. Kelvin gets free and pursues. Eats a couple nice shots from Johny, but is able to keep landing that left over the top. It’s a fight my friends as Johny fires back and lands a combo. 10-9 Kelvin

Round 2 – Pick back up at the 3:30 mark (bathroom break). Johny with a takedown but Kelvin is able to get up with little damage. Kelvin pursues and scores with punches, but Johny fires back with a combo of his own. Kelvin backs him up, lands a knee and punches against the cage. Getting to be a dog fight here, both guys landing some heaters. Big leg kick from Gastelum before the bell. Closer round. Not sure how to score it since I missed the first 90-seconds.

Round 3 – Hendricks is eating some hard combinations that keep him on his heels. Hendricks putting everything into all his shots and seems to be fading as Kelvin patiently picks him apart. He had a very hard weight cut yesterday as well. Johny lands a couple nice body/head combos. Kelvin pushes back though and tests the former champ’s chin. Hendricks with a takedown but Kelvin instantly bounces up and lands a couple elbows to the body as Johny searches for a leg. Final minute. Kelvin pursues, looks for a single of his own. They slug it out the final 20 or so seconds. 10-9 Kelvin

Round 1 – Cat scored a takedown but was unable to capitalize. Pena gets a trip takedown on Cat but ends up on her back after missing a guillotine attempt. Some good ground and pound from Cat but Pena makes it to her feet before the bell. 10-9 Zingano

Round 2 – Takedown from Zingano early. Pena ends up taking her back though with a body triangle looking for the choke. She maintains control the rest of the round. Pena 10-9

Round 3 – Takedown from Pena early. She takes Cat’s back and looks for the choke again. Under a minute to go. Pena lands some nice shots as Cat goes for and eventually gets a sweep. 10-9 Pena

Round 1 – Cain pressing with kicks and punches and constant pressure, pressing to the cage, looking for the takedown. Cain being Cain. Travis lands a couple good shots in the opening minutes. But Cain is in control mostly. Reminds me of those pitbulls they won’t back off no matter what and scores a takedown on Travis, lands some ground and pound before Travis gets up. Cain wobbles him with a punch, misses a wheel kick, lands a knee to the body and gets another takedown. Cain looking great. Evolving. Cain has Travis flattened out face down and lands punches until the ref stopped it. Joe said vintage Velasquez but I think he looks better.

Round 1 – Aldo’s expression and side to side head down rocking during the introductions is captivating, looking like a man about to go into war knowing his life is on the line. Much of the round is point fighting of sorts with no real damage, the final minute or so they threw down with both guys landing some big shots and it going to the ground.

Round 3 – Frankie stuns Aldo after staying in his face for the first couple minutes. Aldo recovers quickly though. Aldo with a big knee to the body as Frankie looks for the takedown.

Rounds 4 & 5 – Both guys kind of played it safe it seemed. There were some good exchanges on the feet but Edgar couldn’t get a takedown and Aldo played the counter game. I have no idea who won.

Round 1 – Cormier with a takedown pretty early and he works from top with ground and pound. Anderson defends most of it, though does take some good body shots and some to the head too. 10-9 Cormier

Round 2 – Big right hand from DC stuns Anderson. Just when it’s getting good DC takes him to the ground and the crowd boos. Daniel gets to side mount and lands some elbows but Anderson quickly recovers half guard. Ref finally stands them up. Silva slow to get up. Big right from DC. Anderson with a knee to the face and is starting to land on Cormier. Cormier backs him to the cage and lands a couple. 10-9 Cormier

Round 3 – They have a great exchange on the feet with both guys landing and then DC takes him to the ground and all the air goes out of T-Mobile Arena with a collective “boo”. Now the action comes to a crawl. Ref stands them up after a time. Anderson hurts Cormier visibly with a liver shot in the final 30 seconds but DC ties him up and it goes the distance. Spider may have lost but he took a fight against the light heavyweight champion on 2 days notice! Ha! He did great.

Round 1 – Lesnar with a takedown about halfway through the round but Hunt bounces up as Lesnar presses him to the cage. Brock looks way healthier than I remember. Faster in his movement. Brock picks him up for another takedown and has side mount. Hunt gets to his knees but Brock is riding him and lands knees to the body and punches to the head. Hunt bursts to his feet but Brock shoots in and puts him back down and gets full mount before the bell. 10-9 Lesnar

Round 2 – Hunt’s breathing hard. Hunt stuffs a takedown. Hunt now smelling his moment, trying to load up for the big one. Brock ducks under a right and goes for a takedown but Mark shrugs it off. Body jab from Brock. Continuous forward movement from Hunt. Hunt stings him with a couple punches. Brock blinks, shakes it off. Seems like Hunt is being patient, slowly wearing him down. Brock ties him up against the cage in the final moments. Hunt 10-9

Round 3 – Hunt with an overhand right that stuns Lesnar. Brock shoots and gets the takedown, gets the tired Hunt pressed against the cage and is landing short left hands. Brock gets to full mount with over 2 minutes to go. He’s been roughing Hunt up already and is battering the side of Hunt’s head now. Lesnar continues this way until the bell and should take the round easily. Lesnar 10-9

Round 1 – Miesha ducks into a big right hand but seems okay. Miesha times a takedown off a leg kick. Nunes escapes back to her feet. Nunes stuns Miesha with a couple punches. She’s hurting her, lands a big overhand right. Miesha backing up, is getting lit up and goes down. It’s all but over. Miesha’s face is a bloody wreck. They could stop it. It goes to the ground, Amanda takes her back and chokes her out. Normally she probably wouldn’t have tapped to the choke as it wasn’t under the chin, but she was done. I would have like to have seen it stopped earlier.

Thanks for hanging out, hope you enjoyed it. It was a fun card.