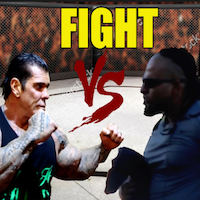 Well it looks like YouTube celebrity and mega bodybuilder, Rich Piana has been officially called out.  Fellow Body builder and proclaimed MMA fighter/boxer, “Prophet Muscle” has challenged Piana to an MMA fight.

The beef between the two bodybuilders originated from a video uploaded to YouTube by Prophet, that disgraced Piana and was nearly an hour long. Not to anyone’s surprise, the video has gained a lot of attention. The video is closing in on 400k views and is rapidly growing by the day. In the video, he goes on to show “clips” of Piana doing actions, not socially acceptable, such as allegedly picking on a disabled person. The video also viciously attacks Piana’s openly admitted usage of steroids. Also, Prophet goes on to rant on how he believes Piana is scamming many people. What makes this video so interesting however, is the exact offer from Prophet Muscle. He offered Rich an outstanding $20,000 to compete in the bout. However, this isn’t the first video along these lines from Prophet, as his whole channel revolves around this “conspiracy” aura, though this is by far one of the longest.

Of course, this led to Rich Piana having to respond in a video of his own. Piana gladly accepted the challenge of an MMA fight, having his friend, “Big Alex” who would be slated to referee the bout if it should take place, by his side. Piana clearly stated in the video he would gladly fight Prophet Muscle and seemed confident in his abilities. In the beginning, he also stated he has been working with “Big Alex”, who is also an MMA fighter. He goes on to dismiss the clips Prophet had put in his video, claiming they were edited and “chopped”. Also, Interestingly enough, Rich recorded the video at MetroFlex, where Prophet Muscle is known to work out, stating they could do the fight in his “house”, referring to the cage inside the gym. Piana also made it known both seriously and sarcastically, that Prophet Muscle only called him out to make a financial gain off of Rich Piana’s well known name. Near the end of Piana’s video, he discusses how everything he has gotten, has been by his own hard work, not given to him. He also goes on to express that he, along with “Big Alex” highly doubts the fight will actually ever materialize.

Is Piana right? Will this fight actually happen? Well as of now, 7/6/2016, there has not been much said, at least on social media from Prophet Muscle. However, we do know that Prophet is the one who called out Piana from the start, and also Piana gladly accepted. So if Prophet was actually serious, we have two verbal agreements and could possibly see a fight. However, with the amount that Prophet offered, and the lack of trash talk since Piana’s video, it could also point to Prophet’s video being merely a publicity stunt. With all of this said, this is a breakdown of the “what if” factor and let’s see who would emerge victorious.

The first “fighter” being broke down is Prophet Muscle. Not much is known too much about this relativity mysterious figure. He claims on his Instagram however, he is a rather accomplished athlete. He is an MMA fighter, boxer, a bodybuilder, and a personal trainer. So if this is said to be true, he would have an advantage in experience against Piana. Along with MMA training, his stand-up game could be sharp with along boxing training. Another Advantage he would have over Piana is his size. From some pictures of Prophet Muscle he is the smaller fighter. This is a good thing for Prophet, as he would have a speed advantage, not only in his striking, but in his footwork and movement.  Also, with Prophet having not to carry around not as much muscle as Piana, if the fights goes on for a bit, he will have the cardio advantage and could use this to his advantage.

Now, moving on to the bigger man, Rich Piana. Obviously, Piana will have the noticeable size advantage in the bout. Piana has also shown on his youtube channel, he has had some prior training with MMA, and surprisingly, had rather smooth striking. He also has great athleticism, something that could counteract Prophet’s probable speed advantage. Also, Piana has decent dexterity for a guy of his size, weighing over 300 pounds.

If Piana can close the distance well, he could end this fight with Prophet rather quickly. Piana’s striking, if able to land, could do serious damage to Prophet early. Also, with being the bigger guy, if Piana is able to get the fight to the ground, he could easily smother Prophet. However, if Piana can’t connect, the fight could easily go in favor of Prophet Muscle. With Profit being the lighter guy, he could stay on his feet fight out the outside, picking apart Piana. Also, if Piana gassed himself out, Prophet could throw longer, light strikes to set up Piana for a huge strike that could put the 300 pound bodybuilder to sleep. With all this said, let’s look at the key’s to victory for both fighters.

Now, to the big question, who would walk away victorious? Well, with analyzing both fighter’s strengths and weaknesses, we have a clearer picture on who would win. Rich Piana actually has showed off of his training and athleticism, where we haven’t really seen anything from Prophet Muscle. Piana also seemed very relaxed in his video, a sign that he is confident in his abilities should the fight take place. I think it is pretty clear, if this fight happens, Piana will be the favorite, and most likely walk away with the win.