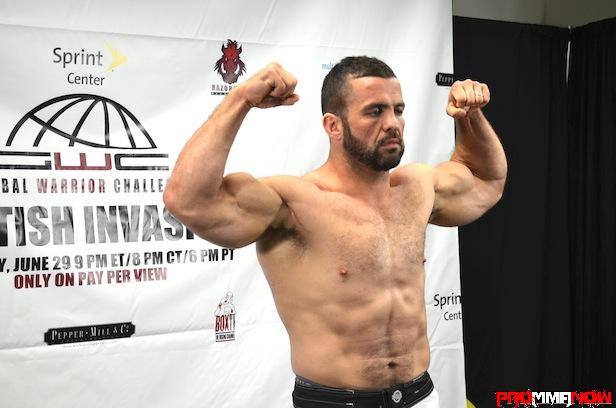 Former British strongman Oli Thompson (17-8) is one of the most exciting heavyweight fighters in the UK. Following a worthwhile journey to Japan on New Year’s Eve, where he won the IGF Championship, “The Spartan” is now scheduled to face one of his toughest opponents to date in former TUF contestant and UFC veteran Matt Mitrione. The matchup will feature as part of the main card for Bellator 158, which takes place at the O2 Arena in London, England, on July 16.

Pro MMA Now (www.prommanow.com) reporter Jay Cee recently caught up with Oli to discuss the upcoming Bellator 158 bout against Matt Mitrione, training, how it feels to be IGF Champion and much more!

Pro MMA Now: Hi Oli, great to have you on ProMMANow.com. I know you won the title a good few months ago, but how does it feel to be the IGF champion? The belt looks like it has a lot of bling attached to it! Haha!

Oli Thompson: Thanks for having me! New Year’s Eve was an amazing experience on many levels, winning a tough fight, winning a beautiful belt, and the perfect end to 2015. What a year it was, I went 5-0 against the odds and took my career full circle after a down period working for some uninspiring companies. I wasn’t allowed to take the belt home due to its value but it’s nice to know it’s kind of mine. The guys in the 8-man tournament were all very tough in different ways, but after beating Minowaman (Ikuhisa Minowa) with no training, I was sure I would win, as I would with anyone when I’m in the right place mentally.

Pro MMA Now: Matt Mitrione has been medically cleared to fight at Bellator 158 in London, England, which means your matchup against him is now official. Tell me what it was like to make an appearance at ‘Bellator 157 – Dynamite 2’ following Matt’s fight when the bout was announced?

Oli Thompson: Yes, great news, Matt is cleared both in business terms and also for peace of mind with his health fighting so soon. I had an amazing time out in St. Louis, I met some top people and got in the ring in front of a huge crowd just enjoying the moment. I wasn’t sure of the plan had Matt not recovered, there wasn’t one, so I would of enjoyed the show and still been waiting for my debut.

Pro MMA Now: Have you been to many Bellator shows before? What did you think of the ‘Bellator 157 – Dynamite 2’ event as a whole and the MMA / Kickboxing combination?

Oli Thompson: No, it was my first time. I really enjoyed the show and concept, it gives Bellator a larger cross over fanbase and also allows the guys to fight in different styles under the same Bellator banner.

Pro MMA Now: It goes without saying that a win over UFC veteran Mitrione would be big. What are your thoughts on Mitrione as an opponent? Were you impressed by his first round KO win against Carl Seumanutafa at Bellator 157?

Oli Thompson: Yes, it’s a recognized name due to his time on TUF and in the UFC, I look at Matt like everyone else, a legit challenge, but my battle is with myself, if I get that right then I have no reason to fear anyone at all. His recovery was great out there, but it wasn’t a great performance, it could certainly of been stopped but Matt coming through justified the decision. I think Carl gave up a simple fight winning position in this instance.

Pro MMA Now: You’re currently riding a 5-fight winning streak which will no doubt give you a lot of confidence going into the Mitrione fight. However, you haven’t fought since December 2015. What have you been up to during the last 6 months?

Oli Thompson: I’ve been very bored, but also ticking over training my basic stuff. I have agreed fights with Volkov, Fedor, and Minakov in this time with the latter 2 turning me down, so the 6 months wasn’t a choice. That said, after such a good 2015 stepping away has probably helped keep me hungry.

Pro MMA Now: Tell me how your fight camp and preparations have been going? It’s not a secret that Mitrione likes to stand and trade, so without giving too much of the game plan away, have you and your coaches focused on stand-up quite a lot during this camp?

Oli Thompson: Well I always train a lot of Boxing and Thai so no change really, I’m only getting a 4-5 week camp for this so my main priority is to be specific to Matt, his southpaw stance and footwork patterns.

Pro MMA Now: During your MMA career we’ve seen you fight for various promotions around the world like KSW, IGF, UFC and even some of the promotions we have over here in the UK like BAMMA. If things go well at Bellator 158 can we expect Bellator to become your new home or do you prefer to keep your options open and maintain working relationships with multiple promotions?

Oli Thompson: I would love to return to IGF and Japan in general when the chance arises! My priority is to make a good run in Bellator, there are 2-3 great fights I see there already, one being Matt. I’m not looking at fighting anywhere else, I will only take exciting fights that motivate me, against ranked guys.

Pro MMA Now: Lastly, you must be excited about fighting on home soil at the O2 Arena in London, England. Do you have a message for the fans about what they can expect to see on July 16th?

Oli Thompson: Take this opportunity to watch some of the top UK and world MMA fighters live in person, it’s a rare opportunity and looking at the fights there will be a lot of excitement!

Pro MMA Now: Thanks for taking the time to speak with me Oli. I appreciate it. If there are any friends, coaches or sponsors you would like to shout out then please go ahead!