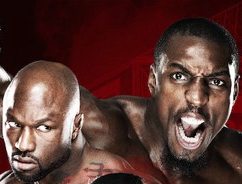 King Mo has won his last seven fights in a row, five by knockout. He last fought on New Year’s Eve when he won the Rizin heavyweight tournament in Japan, winning three fights in two days. But he has a real test ahead of him in former UFC light heavyweight title contender Phil Davis, who submitted Emanuel Newton and knocked out Francis Carmont, both on the same night last September to win Bellator’s 205-pound Grand Prix.

This is an interesting style matchup because of both fighters’ backgrounds.

Lawal (19-4, 1 NC) wrestled on a world level and won gold in the Pan American and U.S. Championships and silvered at the World Cup. His pedigree is undeniable, yet he fell in love with boxing and is now mostly known for his KO power, having won 13 of his 19 fights via knockout. The other 6 he won via decision.

Davis (15-3, 1 NC) is a Penn State 4 x All-American Division 1 wrestler who has developed a very dangerous submission game for himself and he’s now won 5 of his total 15 wins via some form of submission. He’s won 7 via decision and 3 by knockout.

Davis uses more movement and footwork whereas Lawal, who is flat-footed, is more of a plodder and when he catches you his feet are generally planted and you’re going to feel his power. Davis on the other hand often uses the stick-and-move approach and is not so known for that one-shot KO blast. How these two wrestlers choose to approach this match on May 14 at the SAP Center in San Jose will be very interesting to watch. Will either be able to take the other one down? Will Mo land the big one and knock him out, or will Davis catch the submission?

We couldn’t find any betting odds on this fight so we made up our own pretend ones.