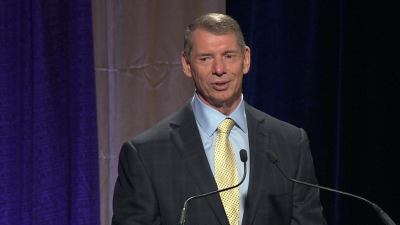 Vince McMahon is reportedly in denial HARD about fan reaction to his hand picked poster boy Roman Reigns. No fan wants another John Cena right now and we have chosen our favorites very vocally. Unfortunately, cranky Vince not genius Vince is running the show and he refuses to acknowledge what we want in favor of what he is telling us we want.

Number one: WWE is editing out the boos.

This is the definition of insanity. If you have to edit out the boos for your top “good guy” there is a problem with your selection. No top guy who is being booked as a good guy should ever have boos incoming. Unfortunately, John Cena ruined any future of a true good guy. His merchandise sales of hot garbage have forced them to push him constantly because he is making money in that department. Thanks alot shareholders. We appreciate that…

No one, and I mean no one is missing John Cena right now. Well, maybe the little kids. The fans who grew up watching the mediocre Ruthless Aggression era are tired of seeing the walking vendor booth that is Cena. His matches are stale and his mic skills are average. He represents all of what fans hate about Vince’s current reign. Rumors are swirling that Vince refuses to make Roman a bad guy even though the fans want it like they did Cena, and is repeating that mistake over and over again.

Number three: Fans are getting angrier as the years go on

You can only deny fans what they want for so long until they just tune you out. If it wasn’t for WWE’s network most fans would have already moved on. TV producer and notable jerk Kevin Dunn is in Vince’s ear heavily and this has never been good. He reportedly is in love with Roman Reigns’s character to the point of stalker man crush. When you have a Kevin Dunn in your ear you are going to be bombarded with bad advice concerning Reigns. Fans, myself included, are tired of not getting what we want.

Number four: Vince is pushing him at the expense of more popular wrestlers

Roman is terrible on the mic, passable in the ring, and lacks any real charisma through the glare of the TV screen. Dean Ambrose is the top guy right now and they are keeping him as far away as possible from Roman. They do not want the real face of the company upstaging their next walking product placement. AJ Styles is going to face him at Payback, but guess what… Rather than have Roman just turn bad as we want and what makes sense Vince is reportedly wanting to turn popular good guys to bad because he cannot accept that Roman is a failure.

Number five: Shoved down our throats

Roman Reigns has been forced so hard down our throats. We are told he is the face of the company every week. Because of the boos the commentators even stated that we boo who we usually cheer for on the RAW after Wrestlemania. He is the champion because they believe that the belt makes the man and not the truth that the man makes the belt. Vince is so desperate for this push to work that he is willing to sacrifice the possible money making of other wrestlers at all costs to prove he was right about Roman.

The announcers can convince kids that he is the face of the company, but the majority of us know better. Shame on you.

These are just the top 5 and believe me there are hundreds more about this guy and why fans despise him.

One thought on “Top 5: Reasons Roman Reigns is failing as champion”