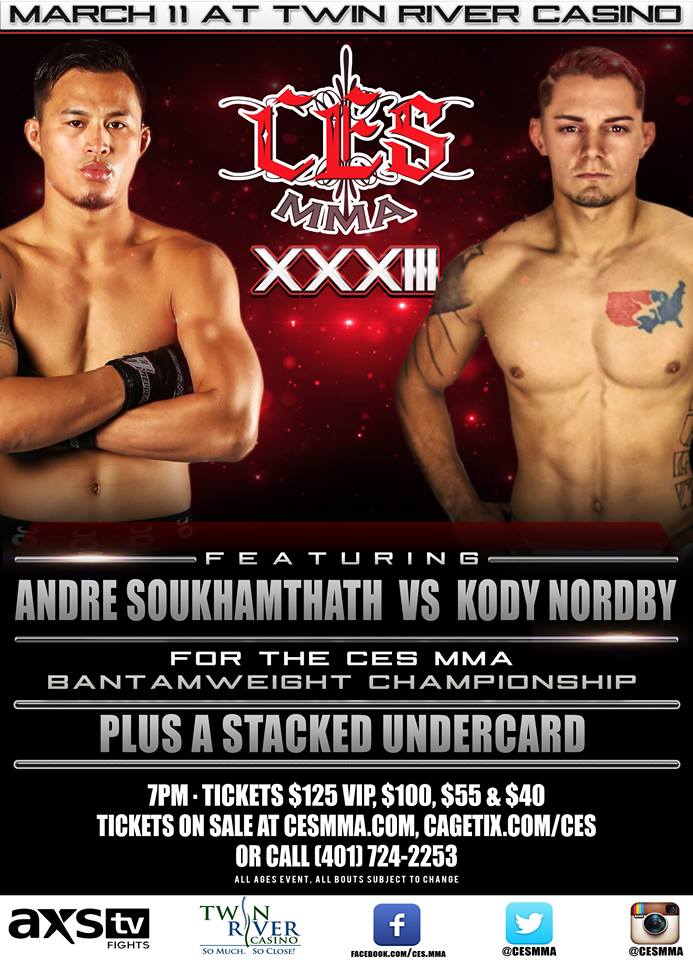 Classic Entertainment & Sports has announced that Andre Soukhamthath (9-3) and Kody Nordby (6-3) will square off for the inaugural CES MMA 135-pound title in the CES MMA XXXIII main event on March 11 at Twin River Casino in Lincoln, R.I. The event will broadcast live on AXS TV at 9 p.m. ET/6 p.m. PT.

Both Soukhamthath and Nordby went to the same high school in Rhode Island and turned pro around the same time. The Blackzilian-trained Soukhamthath is coming off a second round TKO over Carlos Galindo in October.

Nordby has submitted his last three opponents in the CES MMA cage, and all in the first round. The 22-year-old Ronin MMA fighter last fought on Jan. 8 when he made short work of Derek Shorey via rear-naked choke at the 0:41 mark.

In addition, a middleweight matchup between former training partners Chuck “Cold Steel” O’Neil (15-8) and Dennis Olson (14-10) has been tapped for the co-main event. O’Neil is a UFC vet and former CES MMA 170-pound champ who is looking to bounce back after a two-fight skid, while Olson is coming off a stint in Bellator where he suffered back-to-back KO losses against Paul Daley and Brennan Ward.

Mark your calendars. CES MMA XXXIII on March 11 on AXStv. For ticket and bout information go to cesmma.com, cagetix.com.