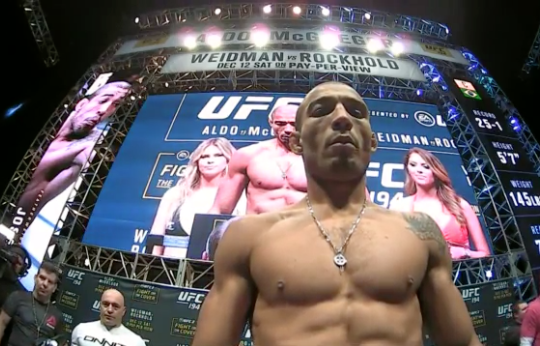 Longtime UFC 145-pound champion Jose Aldo lost his title via quick 13-second knockout to Conor McGregor in December. Prior to that the 29-year-old Nova Uniao product had gone a decade without a loss. Up until McGregor, Aldo had been the only UFC featherweight champion in history, a transplant title-holder after the WEC’s 145-pound division was appropriated by the UFC in 2011.

Now Aldo feels after the way their first fight ended (“got caught” as they say) and after all he’s  done for the company, he deserves an immediate rematch against McGregor. Whether or not it’s for the title, Aldo says he doesn’t care, he just wants to whip Conor’s ass. And he is not going to accept any other fight.

I was quiet until now, but I’ve decided to talk This is my message @ufc @danawhite @lorenzofertitta @TheNotoriousMMA pic.twitter.com/3FjMKak4xl

“Hi everyone, I was quiet for a while, because I was waiting for my rematch. In fact, I was already training for it, based on how the fight went down. But apparently I was wrong. So I wanted to make something clear to the UFC: for everything that I’ve done, everything I’ve accepted, and mostly how the fight ended, I will not accept any other fight other than a title shot. My only exception would be fighting Conor McGregor. At any time, anywhere, and since he is scared and knows that I’m gonna win… It doesn’t even have to be title fight against him. You can keep my belt. What I want is to whoop your ass. Again: any time, anywhere.
Dana White Lorenzo Fertitta, keep ur word. I still believe in the company that I work for. ‪#‎rematch”

You can’t blame Aldo for believing he deserves an immediate rematch. He infers the UFC brass promised him the fight by saying “keep ur word”. But Conor first has a date with Rafael dos Anjos at UFC 197 on March 5 at 155 pounds. Aldo evidently doesn’t intend on fighting anyone else but Conor so he will be on ice at least until the Irishman and the lightweight champ do the eight-limb tango in March.

For reference, here’s the current top 15 UFC fighters at featherweight:

Even when Conor does fight at featherweight again, there’s no guarantee it will be against Aldo. Conor will fight who Conor wants to fight is my inclination. And if the Irishman wants to give Frankie Edgar his shot before Aldo, then that will most bloody likely be how it’s gonna be. And as for the rest of the featherweights, just mix it up amongst yourselves for the moment, the King has left the division.