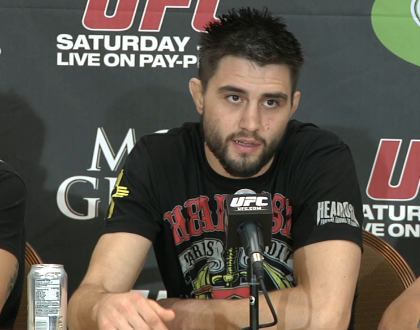 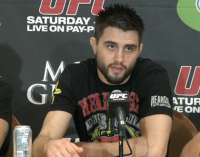 Could Carlos Condit really retire after that amazing performance against Robbie Lawler last night in the UFC 195 main event? That’s the word after the two had one of the best rounds in UFC history to close out the first Pay-Per-View card of 2016.

We here at PMN had Condit winning. Dana White even said he scored the fight for Condit. The stats show Condit landed way more significant strikes. But Robbie’s higher scoring percentage (51%) combined with his aggression and power likely swayed the judges in the split decision victory. And that’s okay. But please for the love of all that is holy, please Carlos Condit do not retire. You deserve a rematch and the fans will pay to watch it. Get paid, get one more shot at the belt (SO CLOSE) then retire if you want to.

Condit spoke about the possibility of hanging it up at the UFC 195 post-fight press conference and explained why this may have been his last fight.

“It’s not really an emotional thing,” Condit said. “I’m not dejected. I don’t know. I have to evaluate, but there’s a possibility it might be my last one. We’ll see.”

“I’ve been at this for a long time, over 40 professional MMA and kickboxing fights,” stated the former WEC champ. “I don’t know. I came up short tonight. I don’t know. Tonight was kind of a do-or-die moment for my career, I feel like, and I was all in. If I got that strap, I was going to keep fighting. If I didn’t, like I didn’t, I have to see if I can continue to do this.”

“I think this fight was closer (than the St-Pierre fight),” he said. “I’m proud of the way I fought. A guy like Robbie, stylistically, is better. We went out there, we threw down. It wasn’t him trying to lay on top of me. It was us out there throwing some heat trying to put each other down.

“It was a different fight. He pushed me,” Condit said. “I had to fight my ass off instead of that technical, ground and pound, somewhat arguably boring kind of fight that was my first title shot.”

Talk of an immediate rematch between the two was quickly put on ice. Both guys have to heal up and Condit will have to take a turn at the crossroads he is fast approaching. We want to hear your thoughts in the comments section below, should “The Natural Born Killer” come back for one more if he gets an immediate rematch?