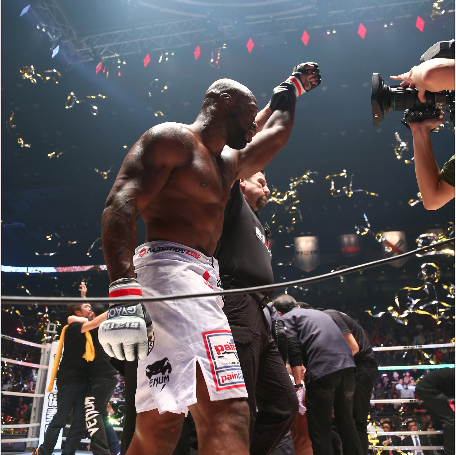 King Mo! Woah. The self-proclaimed “money weight” fighter entered the RIZIN FF Heavyweight Grand Prix against very large men with giant muscles, including the 6-foot 4-inch Jiri Prochazka who Mo knocked out in the finals with a vicious right hook that sent the Czech fighter face-first to the canvas. Take a look.

The 34-year-old former Strikeforce Light Heavyweight Champion went home with 40-million Yen, that seems to be about $332,000 in cash. Three fights in 48-hours. Two knockouts. And one king. And then Mo placed his crown on Rizin Fighting Federation founder and former Pride Fighting Championship President Nobuyuki Sakakibara, showing respect to the man who brought him back to Japan where he began his pro MMA career about eight years ago.

Fedor Emelianenko made his return in the Day 2 main event, fighting for the first time in over three years against Indian kickboxer Jaideep Singh. Singh, who was only 2-0 as a pro MMA fighter, was totally out of his element on the ground and Fedor used his patented ground and pound to control and ultimately finish the 28-year-old (watch the full fight here).

There were other highlights like the Bob Sapp vs. Akebono and Gabi Garcia vs. Lei’D Tapa freakshows. Kron Gracie looked good in his submission win over Asen Yamamoto. And Shinya Aoki beat an old tired Sakuraba in the Day 1 main event.

*Efrain missed weight, so his win was overturned to a No Contest