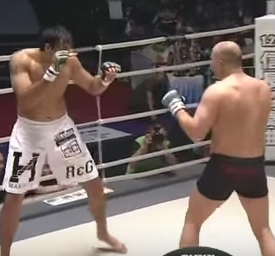 The Last Emperor made his long awaited return to the ring on New Year’s Eve in Saitama, Japan. Fedor Emelianenko fought Jaideep Singh on day 2 of RIZIN‘s two-day event and used his famous ground-and-pound to stop the 28-year-old Indian kickboxer. On the feet, Jaideep had a much better chance but once Fedor took him down it was just a matter of time.

Do you think we’ll see Fedor against a “legit” opponent next time? Singh was a very experienced kickboxer, but as you can see, he lacks a well-rounded mixed martial arts game at this stage.