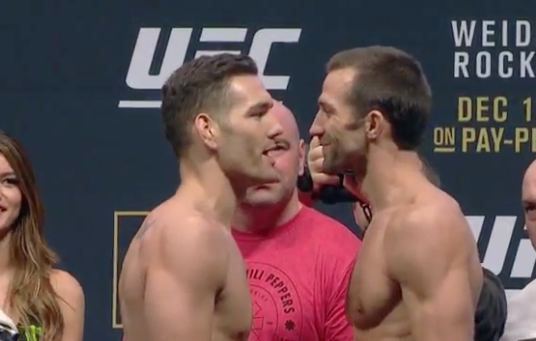 American Kickboxing Academy’s Luke Rockhold became the new UFC middleweight champion over the weekend after stopping defending title-holder Chris Weidman via fourth round TKO at UFC 194. There were many who thought the fight should have been stopped in the third round once Rockhold had Weidman mounted and delivered about 50 unanswered shots to the dome.

Rockhold was also surprised referee Herb Dean didn’t halt the action in Round 3.

“I thought it should have been stopped,” Rockhold told TMZ Sports in a new interview. “I mean, going back and looking at it now, it was pretty brutal. The unanswered punches I was delivering and I was just thinking, is this man going to stop it, like what do I have to do to get this done? Unfortunately I had to suck it up and go another round, and Chris being the champ he is, he came forward and tried to get it, but I knew I was going to shut him down.”

Here’s what I wrote during PMN’s UFC 194 live blog during the fight:

“One minute to go. Luke raining down punches, Weidman looks lost, just covering up. Herb Dean not stopping this for some reason. Weidman can barely walk as the bell sounds. This is just weird. 10-8 Rockhold.”

Rockhold’s head trainer at AKA, Javier Mendez, also thought Herb Dean should have stopped the fight. He was “cussing” and “f-cking pissed” and explained what he would have done had he been in Rockhold’s corner.

One of the few people who apparently didn’t want the fight stopped was Weidman’s coach.

Rockhold’s interview with TMZ Sports below.

Check out the Luke Rockhold vs. Chris Weidman full fight video highlights below and starting at about the 1:35 mark you will see just how many unanswered blows Weidman took in the last minute of Round 3. Let us know your thoughts, did Herb Dean let it go too long?