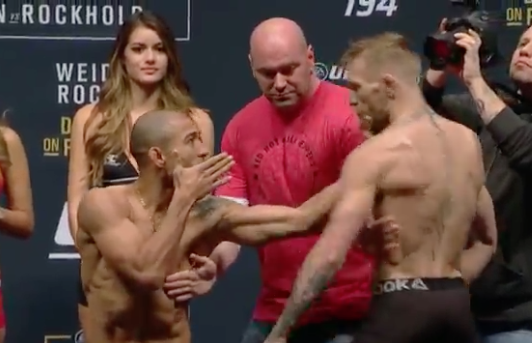 Round 1 – Hard high kick from Marcio smashes into the forearms of McGee. Now a body kick. Court with his own body kick. Court shoots in, pushes Alexandre to the cage in the clinch. Half the round gone. Alexandre is able to break out. Straight left from Alexandre. Nice straight left from Alexandre. Low blow from Court forces the timeout. … Court lands a spinning backfist, goes for a takedown but gets caught in a guillotine by Alexandre. He pops his head out. Court finishes on top with ground and pound. 10-9 McGee.

Round 3 – High kick and a right hand from Court, followed by a takedown complete with ground and pound, but Alexandre gets to his feet, Court pushing him to the cage. Straight right from McGee time off Marcio’s low kick. Low kick from Court. Straight left from Marcio, then a body kick. Left from Court. Clinch, presses marcio to the cage. Takedown from Court as Marcio tries to jump on a guillotine. Court dropping punishment from inside full guard, body shots, elbows to the head, just a minute to go now. He pours it on before the bell and ends the round on top. 10-9 McGee.

Round 1 – Medeiros the busier of the two in round one, Makdessi picking it up toward the end of the round. Their significant strikes landed are fairly close though.

Round 2 – Medeiros is taller and is trying to use his reach. Makdessi lands a beautiful spinning kick to the head. Medeiros gives him a fist bump. Makdessi getting the better of the standup in round two. Nice right from Medeiros. Makdessi with lots of leg kicks. Medeiros pushes him to the cage, Makdessi defends the takedown. Nice counter left from Makdessi. 10-9 Makdessi.

Round 3 – Makdessi continues to get the better of the striking. Nice spinning back kick to the body about halfway in. He catches a kick and dumps Medeiros with a couple punches. … Medeiros landing the occasional jab or one punch at a time. Being cautious. One minute to go. Makdessi pushing forward. Body kick. Leg kick from Medeiros. One two from Makdessi. They trade left hooks. Makdessi gets dropped with a counter let hook during an exchange at the end of the round. 10-9 Medeiros (for the knockdown).

Round 1 – Couple of low kicks from Proctor but Mustafaev starts finding success with punches, hurts Proctor with a left body kick then a knee to the body then head that drops him. Mustafaev follows up with punches and the ref stops it.

Round 1 – Front kick from Santos. Left jab from Lee. Quick jab from Santos. Front kick to the body from Santos. Lee returns with same. HUGE leg kick from Santos. Another. Jab. Front kick. Body kick from Lee, right hand to the body. Santos ducks under for a perfectly timed takedown. He hops on Lee’s back during the scramble. But Lee escapes on his feet. High kick from Lee but he gets countered with a right hand that drops him. Santos is all over him with more right hands as Lee tries to get to his feet. Big John stops it. Santos is so excited he runs into the stands. Lee seems upset with the stoppage but it seemed okay from what I saw. Santos, who is known for his BJJ game, was more than thrilled with his TKO win.

Round 1 – Body kick from Alves, followed by a takedown from Covington. Alves back up, pressed to the cage by Colby, who’s looking for the takedown. Elbow from Covington. Alves hops on a guillotine. Colby slams him to the mat but he doesn’t let go and the impact may have broke his ribs. Colby taps out.

Round 2 – Low kick from Lybarger, jab. Right over the top from Torres. They tie up against the cage. Torres turns Lybarger to the cage but can’t hold her there and they both land some good shots on the break. Lybarger stuffs a takedown and pushes Torres to the cage. Torres turns her around, but not for long. Lybarger breaks out, gets tagged from Torres with a couple rights. Lybarger shoots, gets pushed over to her back. Torres dropping elbows from side mount. Lybarger gets Torres in half guard. Hammerfists from Tecia. Lybarger goes for a footlock at the bell. 10-9 Torres.

Round 3 – They tie up against the cage, Torres controlling, she backs out. Nice right from Torres as Lybarger tries to stalk. Front leg side kick from Torres. Body kick from Lybarger. She continues to pressure but Tecia’s movement is giving her trouble. Short right hook from Torres. Lybarger pushes her to the cage looking for the takedown. Elbows to the side of the head from Torres. Torres lighting her up now with punches, has her hurt against the cage. The Tiny Tornado just went El Nino on Lybarger but she’s still standing as Torres presses her to the cage in the final minute. Knee on the break from Lybarger, her face busted up. Lybarger connects big during a final exchange. Great action. 10-9 Torres. Good showing from Lybarger on a short notice fight.

Round 1 – Maia shoots right away, Gunnar ends up on top but Maia is right back up. Clinched, knee from Maia. Gunnar holding the neck as Maia works for a single. Trip from Gunnar and he ends up on top in half guard. Maia back up with a single leg takedown, then he takes Gunnar’s back, both hooks in. Gunnar rolls but ends up on bottom of a full mount eating punches. He gives up his back. Now back to mount. All the time eating punches. Gunnar back to his feet trying to shake Maia off. Maia locks on a body triangle, landing punches. Elbows from Maia. 30 seconds to go. Maia looking for an armbar. Gunnar rolls out to his feet, lands a couple punches before the bell. 10-9 Maia.

Round 2 – Straight left and a shot from Maia, but ends up on bottom briefly. Maia back up looking for the single, now with a body lock. Maia trying to take his back while standing. Gunnar goes to his knees and Maia now fully locked on his back. Gunnar eating lots of punches as Maia rides his back. Half the round down. Gunnar is able to roll and take top control now. Maia gets a reversal with 90 seconds to go. Landing some hard elbows in the final 30 seconds. Maia to full mount where he deals out more damage. 10-8 Maia.

Round 3 – Maia with a takedown early. Gunnar gets his neck but can’t hold it. Body shots and elbows from Maia. He continues the punishment, landing repeated elbows as we hit the 3 minute mark. Maia hops on his back and locks on the body triangle where he lands body shots and hammerfists softening the Icelander up. Under a minute to go now. Gunnar spins to top control with 15 seconds left. 10-9 Maia.

Round 1 – Touch gloves. Romero with a body kick. Straight right from Jacare. Body shot from Jacare. Left to the body from Jacare. Leap in left from Romero. Overhand left from Jacare stunned Romero for a second. Spinning backfist from Romero drops Jacare. Romero goes in to finish, throwing bombs. Jacare trying to tie him up. Jacare almost gets a triangle locked on, eats several big shots, goes for an arm. Romero continues the assault. 10-8 Romero.

Round 2 – Front kick from Romero. Jacare shoots in, gets pushed aside. Jacare goes for a single, gets a bodylock, trying to get a takedown. Romero holds the cage and it allows him to end up on top when it goes down. Ref stands them up and warns Romero about holding the cage. Nice body shot from Jacare. Body kick. Leg kick and a right from Jacare. Inside leg kick from Romero. 10-9 Jacare.

Round 3 – Body kick from Romero. Front kick from Jacare, leg kick. Both switching stances. Front kick and a left from Romero. Inside leg kick. Jacare shoots, Romero escapes. Nice body kick from Jacare. Front kick romero. Jacare lights him up against the cage with punches. Jacare with the takedown, now on top in half guard. Jacare landing punches from half guard. Knees to the body. Romero gets up with 10 seconds to go, they stay tied up against the cage. 10-9 Jacare.

Round 1 – Leg kicks, then a left hook and a takedown attempt from Weidman, he jumps on Rockhold’s back while standing. Both hooks in. Rockhold tries to shake him off and gets him off finally. Rockhold now pressing Weidman to the cage. He gets turned around. Knee from Weidman, then a takedown on Rockhold. Weidman looking for the back, pressing to the cage, knees from both. Elbow from the New Yorker. Takedown from Weidman, Rockhold catches his neck but doesn’t have his legs controlled. Under a minute to go. Herb Dean stands them up. Body kick, hich kick. Weidman with a takedown. Rockhold looking for the guillotine, Weidman pops his head out and Luke ends the round on his feet. Weidman 10-9.

Round 3 – Touch gloves. Body kick from Weidman, low kick. Body kick from Luke. Weidman with same. Right jab from Luke. Weidman clinches up against the cage, backs out. Body jab from Weidman, two low kicks. Body jab. Left hand from Weidman and he gets a rather easy takedown on an apparently stunned Rockhold. But Luke gets up within several seconds. Lead left hooks from Weidman. Low kick from Luke. Body kick Weidman. High kick from Luke, followed by a couple punches. Body kick Weidman, another. Weidman goes for a spin kick but Luke uses this to take him down with 90 seconds to go. Luke on his back with both hooks in. Luke moves to full mount. One minute to go. Luke raining down punches, Weidman looks lost, just covering up. Herb Dean not stopping this for some reason. Weidman can barely walk as the bell sounds. This is just weird. 10-8 Rockhold.

Round 4 – Body kick and a right from Rockhold, he goes for the takedown, clinched against the cage. Rockhold with the takedown and Chris Weidman is breaking. Rockhold back on top in half guard. Now full guard. Chris trying to tie him up. Body shots from Luke. Punches to the head as Weidman tries to get up. Luke postures up, dives in with a big left elbow. Weidman’s face looks like a crime scene. Weidman gets mount again and pounds him out until the ref stops it.

Round 1 – Conor throws a side kick to the knee then throws a left hook that puts Aldo out, McGregor follows up with a couple hammerfists and Aldo is out. The first punch Conor threw cut his lights out. That little Leprechaun is a magician my friends. Crazy goddam thing I’ve ever seen. He’s  the new Ronda Rousey.