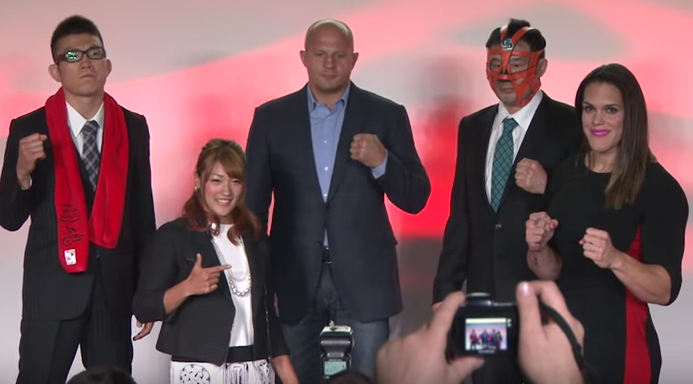 Rizin Fighting Federation has announced four additional bouts for their New Year’s Eve World Grand Prix 2015 card scheduled for Saitama Super Arena in Saitama, Japan on Dec. 29th (Tuesday) and 31st (Thursday). The main attraction on Rizin’s debut card will be the return of Pride legend Fedor Emelianenko who will compete against an opponent still to be determined.

Among the new fights announced, Shoot boxing champion Rena Kubota will face Jleana Valentino from Italy. “My opponent is a kickboxer so I think it will become a stand up fight,” stated Rena at a Rizin press conference this week. “My goal is to finish the fight in a spectacular KO like Mirko, but I also want to surprise you all, I might go for the flying armbar. I have been improving my MMA skills, so please look forward to see it”. Valentino commented, “I am training hard for my first MMA fight. So I think Rena and I will put on a beautiful performance that only we can do”.

Also, DEEP champion Yuki Motoya takes on South Korean Flyweight standout Nam Jin Jo. “My opponent is the number
one guy in South Korea, but I am the number one guy in Japan,” said Motoya. “I have defeated big names who have fought for PRIDE and other shows, so I would like to show my potential to everybody by winning by KO. There are many big guys on the card, but I want to show the speed and aggressiveness of smaller guys to the fans.” Nam Jin Jo stated, “I want to represent South Korean MMA and will put in all I have into this fight so I can receive the biggest applause after my fight”.

Cosplay fighter Yuichiro Nagashima will battle Dutch kickboxing legend Andy Souwer. Nagashima appeared as one of the characters for a popular video game called “Steins;Gate”, and said, “The last time MMA was on terrestrial television, I fought in it. The time has stopped since my fight, so I believe it is my job to restart time with my fight. I would like to
show a mysterious fight that only Andy and I can put on”. Souwer responded, “I was a bit surprised when I got the offer for a MMA fight. But I’ve always had the idea of challenging MMA utilizing my striking skills so it made sense to me. I am very excited on how the fight is going to turn out, and how I am going to perform”.

Finally, the very unique DJ Taiki (Daiki Hata) will face hard-hitting veteran Hiroyuki Takaya. “I lost my last fight and showed my weakness to Yukarin (his favorite voice actress), so this time I will win and show her how cool I am”, said Taiki. Takaya also spoke, “Its been a while since I’ve fought in a big show, so I’m motivated. I will do my best to end the fight as quickly as possible”.

In addition to Fedor and the four aforementioned match-ups, Rizin’s New Year’s Eve show will also feature Shinya Aoki vs. Kazushi Sakuraba, as well as BJJ ace Gabi Garcia and former Sumo wrestler Kaido Hoovelson against opponents still to be announced. Stay close to www.prommanow.com as more bouts will be added to the Rizin World Grand Prix 2015 card in the near future.

Here’s a replay of Rizin’s first press conference a couple weeks ago: