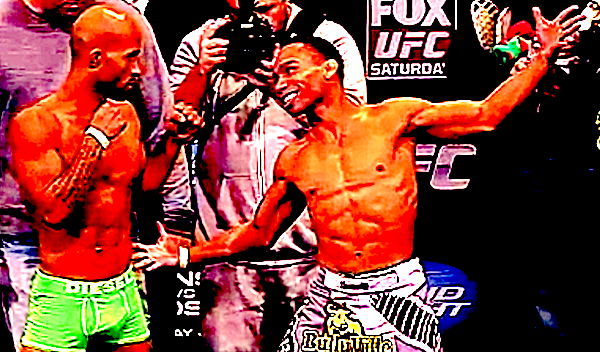 John Dodson (17-6) has only fought three times since he first faced Demetrious Johnson (22-2-1) for the UFC Flyweight Championship in January 2013. Despite Dodson dropping Johnson three times in that fight, he still lost the unanimous decision.

Dodson has the power advantage, is a good counter striker and may be just as fast as Mighty Mouse. But it was Johnson’s constant pressure, conditioning and technical prowess that allowed him to win their first matchup. Dodson tends to put all his power into each strike and the beefy flyweight showed that he slows down over five rounds. Johnson does not.

Johnson really worked Dodson over in the clinch against the cage in their first fight, especially in the fourth round, landing knee after knee as Dodson tried playing the three-points-of-contact rule to his advantage. Dodson mostly throws a single punch or kick at a time. Johnson uses more combinations. Johnson seems to have a higher fight I.Q. than Dodson and puts it all together better.

Mighty Mouse has noticeably improved since he first fought The Magician. He’s fought five times since they first met, won all five, and finished four of the opponents — three via submission and one by knockout. The knockout came in the first round in a rematch against Joseph Benavidez, who Johnson had won a close split decision over the year prior. This is another sign of the champ’s evolution.

Johnson has won nine of his 22 wins via submission and four by knockout. Dodson has won 17 of his victories via knockout and two by submission. Can Dodson knock Johnson out at UFC 191? Absolutely. He almost had him out in their first fight. But more than likely what we’re going to see is an even better version of Demetrious Johnson do to John Dodson what he did in their first fight, except it will even more decisive, with the 29-year-old Madisonville, Kentucky native possibly even finishing The Magician.

Oddsmakers have Johnson a pretty heavy favorite at -550 with Dodson coming in at +425. Dodson did have a brand new baby girl this week, so that has to play into things, but let’s not forget he dropped the champ THREE TIMES in their first bout. Him being a +425 underdog seems a bit much. Still, my pick is for Johnson and I think he’ll finish him.

Take a look at Johnson and Dodson’s first fight from the UFC on Fox 6 main event in January 2013: