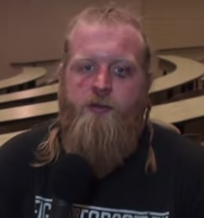 Justin Wren has been all over the place since returning from the Congo where he saw slaves freed and helped save lives by providing clean water. Wren has recently been on the Joe Rogan podcast, The Fighter and The Kid podcast, as well as a number of prominent mainstream news outlets talking about his return to MMA and his Bellator debut which took place last night. Wren aka “The Big Pygmy” took home a unanimous decision win over an extremely tough and bull-headed Josh Burns who took some devastating knees to the face and punches but would not go down. The fact that he had no neck and looked like a yoked Tank Abbott went a long way into ensuring he made it a full three rounds.

It was Wren’s first time back in the cage in five years and he looked good. You could tell there was ring rust but you could also tell he knew what he was doing. The muscle memory took over and Justin plowed through, controlling Burns against the cage when necessary and creating distance to score with strikes when able. Justin wasn’t that pleased with his performance (we think he’s being hard on himself) but he’s more than happy with the attention that has been brought to his cause, Fight for the Forgotten, and he does plan to eventually make a run for the Bellator heavyweight title.

Take a look at this interview our buddy Aaron Tru over at MMAPrime.TV did with The Big Pygmy after the fight: