Watch Justin Wren on ‘The Fighter and the Kid’ podcast 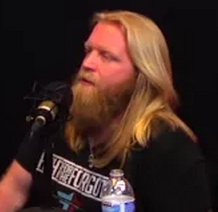 After losing a decision to Roy Nelson in the TUF 10 quarterfinals, heavyweight MMA fighter Justin Wren went on to fight once in the UFC in 2009, losing a split decision to Jon Madsen. Wren returned to the regional scene in 2010 where he won three straight and improved his record to 10-2. But then he disappeared. Where did he go?

In this new interview with ‘The Fighter and The Kid’ Wren discusses what happened, why he was kicked out of his gym after developing a drug habit and how he got clean. Wren also describes a vision that ultimately led him to the Congo where he began fighting for forgotten Pygmy tribes who were living amid slave-like conditions without even clean water to drink.

Listen in as Wren talks about his journey and why he’s decided to return to MMA, debuting with Bellator on Aug. 28 when he faces Josh Burns.

Learn more about Wren’s Fight for the Forgotten project.