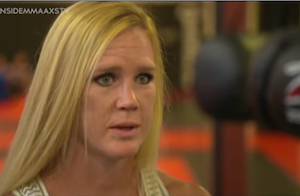 At least she’s honest. Holly Holm realizes on paper she shouldn’t really probably be fighting Ronda Rousey this soon but when opportunity knocks you gotta go in guns blazing and that’s what the boxing champion wants to do as she enters the octagon for the tenth time, now on Nov. 15 at UFC 193 in Melbourne. When asked if she will be prepared if the fight goes to the ground against Ronda, Holm doesn’t sound too confident, but who can blame her? The World’s Most Dominant Athlete has more arms in her collection than the Hindu Goddess Kali. On the feet Holm has a shot if she can keep her distance, but if Rousey gets on the inside and gets a hold of her, it will only be a matter of seconds once the fight hits the ground.

Listen in as Holm tells AXStv’s Ron Kruck that Ronda Rousey is beatable.