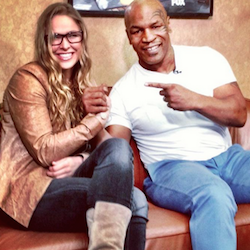 UFC women’s bantamweight champ Ronda Rousey took Floyd Mayweather Jr. to task at the recent ESPY awards where she picked up “Best Fighter” honors. Upon receiving the award, Ronda made the comment, “I wonder how Floyd feels being beat by a woman for once. I’d like to see you pretend not to know who I am now.”

Obviously it was a reference to the boxer’s past issues with domestic violence as well as that time he threw shade at the UFC diva saying he “didn’t know who HE is”. In this interview with “America’s Pregame” on Fox, Rousey explains why she chose that moment to call out Mayweather and why she views Floyd differently than she does Mike Tyson, who she considers a friend and who has had his own troubles with domestic violence.

“Mike [Tyson] is a great example I think, where he’s put in so much effort over so many years to better himself as a man,” explained Rousey. … “He’s owned up to the things he’s done. He’s denied the things he hasn’t done. He’s paid his debt to society. He almost lost everything for it and put so much work and so many years into bettering himself as a man. And I admire that kind of effort and humility out of Mike just as much as I admire his fighting and he really gained my respect as a man as seeing how he’s handled himself over the years. I really hope that Floyd Mayweather grows up to be like Mike Tyson.”

Do you agree with Ronda on her assessment of Tyson? Is he indeed a better man than Floyd “Money” Mayweather?