Conor McGregor thinks Chad Mendes is ‘in over his head’ 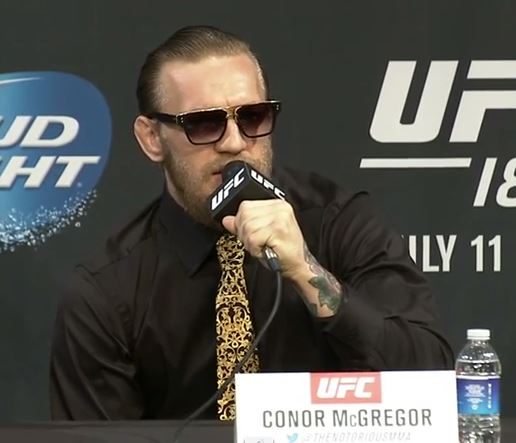 The UFC 189 main event bout between Conor Mcgregor and Chad Mendes this upcoming Saturday seems to have captured the attention of MMA fans everywhere. With reports suggesting an increase in ticket sales since it was announced that Mendes would be stepping in for Jose Aldo, and record breaking UFC attendance figures predicted for both the weigh-ins and event, it is clear that everyone wants to see if “the notorious” can emerge victorious once again, but this time with the UFC interim featherweight title around his waist.

At today’s UFC 189 pre-fight press conference “Money” Mendes expressed how excited he was to be taking part in the event and when asked if he was emotionally involved in the fight he said the following:

Without meaning to sound dismissive of Chad’s comments, this type of response is not too dissimilar to that of McGregor’s previous opponents in the octagon. After all, fighters can’t appear to show weakness, and maintaining a confident demeanour is an essential piece of armour to be wearing during any mental warfare prior to a fight. However, when it comes to performing in the UFC octagon, McGregor has delivered every time thus far and many of his opponents have unwillingly become emotionally invested in their fights against him. If Mendes can avoid this then he poses a big threat in the fight, he will no doubt feel confident coming off a big win over Ricardo Lamas in April, and he’ll be just as hungry as Conor for that interim featherweight strap.

During the press conference Mendes referred to McGregor as a one-dimensional fighter who can only fight on his feet. When asked if he thought Chad’s comments were disrespectful McGregor said:

“Not particularly, no. I think every athlete must have things that they go to, to believe in to enter the contest. But he knows himself, and he will know, that he is in over his head. It’s as simple as that. The first exchange, he will know.” – Conor McGregor

There is no doubt that Chad will be the toughest opponent Conor has ever faced and if it wasn’t happening now, I’m sure these guys would have crossed paths at some point in the near future anyway. That said, the last minute change in opposition does add an interesting dynamic to the fight, after all, McGregor was training to fight Aldo, not Mendes. Some important questions will definitely be answered on Saturday night. We will get to see how Conor deals with Mendes’ wrestling and how well he can adapt to a last minute change in opponent. According to McGregor “They are all the same”, but we will find out if this is really the case at UFC 189.