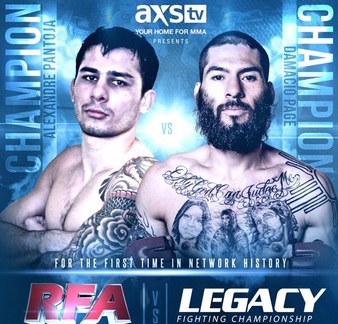 PMN is headed to Tunica for Friday’s RFA vs. Legacy FC inaugural Superfight card, but before the Super Bowl of MMA airs live on AXStv, fans can tune into a live stream of Thursday’s weigh-ins starting at 4 p.m. ET (1 p.m. PT) right here.

The RFA vs. Legacy FC 1 fight card will feature three title bouts with RFA’s Alexandre Pantoja (15-2) taking on Legacy FC’s Damacio Page (19-9) for the first-ever AXStv Flyweight Superfight Title in the main event. In the co-headliner unbeaten RFA Bantamweight champ Luke Sanders (9-0) defends his title against Terrion Ware (13-3). And the vacant Legacy FC Lightweight Title is on the line as Dave Burrow (13-5) clashes with Mike Bronzoulis (17-8-1).

“AXS TV: RFA vs. Legacy FC Superfight” will broadcast live on AXStv Friday night (May 8, 2015) from Horseshoe Tunica Resort & Casino in Robinsonville, Miss. Be sure to join us here at PMN for live results and round by round updates of the action, as well as interviews with the night’s big winners. 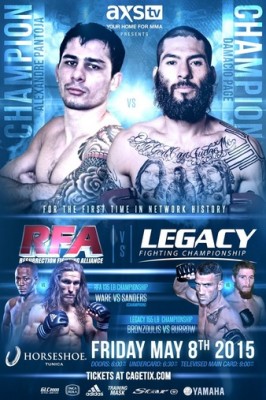