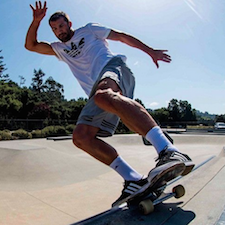 Not only is Luke Rockhold the UFC’s No. 1 ranked middleweight, he’s also an avid surfer and skateboarder. Check the American Kickboxing Academy standout doing his thing at the local skatepark. The UFC doesn’t necessarily approve of their fighters (especially top tier fighters) participating in dangerous extracurricular activities such as this (see Donald “Cowboy” Cerrone), but Rockhold could argue that he is cross-training and working on his balance and coordination.

Sorry @danawhiteufc @foxsports made me do it. injury free

While the 30-year-old Rockhold is no Tony Hawk on a skateboard, he looks pretty good. You can tell he knows what he’s doing and has been skating for some time. He looks a little off, like maybe he hasn’t been riding much lately, but he clearly has a solid foundation and hopefully we’ll see more shredding from the Santa Cruz native in the future.

While it’s not official yet, Rockhold could face the winner of May 23rd’s UFC 187 Middleweight Title bout between champion Chris Weidman and challenger Vitor Belfort.