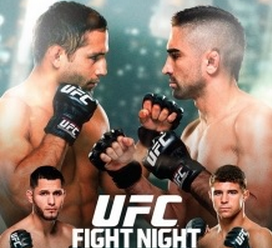 UFC Fight Night 63 takes place today from the Patriot Center in Fairfax, Va. It’s an early card today, kicking off at 11 a.m. ET/8 a.m. PT on Fox Sports 1 with preliminary card action, then moving to the main card at 1 p.m. ET/10 a.m. PT. Number one ranked Featherweight Chad Mendes will take on number four ranked Ricardo Lamas in the main event, and lightweights Jorge Masvidal and Al Iaquinta will clash in the co-headliner. We’ve also got a couple of female fights on the card and several other notable names competing.

Stick with us here at PMN as we provide live results and round-by-round updates of all the action.

Round 1 – Jones comes out aggressive but takes a big body kick from Stallings that hurts him. Stallings backs him to the cage and lands punches and another body kick. Jones takes him down but gets caught in a guillotine. Jones is able to roll out though and is back to his feet and they clinch against the cage, Jones looking for a takedown. Jones backs up with punches that miss, then goes back to looking for the takedown against the cage. He is controlling the action at least. One minute left in the round and they remain clinched against the cage for the rest of the round. 10-9 Jones.

Round 2 – After taking a couple shots Jones presses Stallings to the cage once more. High kick from Jones after the ref separates them. Couple jabs from Stallings and he presses Jones to the cage. They separate and Stallings lands a nice straight left and a high kick. Jones is able to score a takedown though with under 2 minutes to go. Some light body shots from Jones inside guard with under a minute to go. Jones postures up to try and get something going but settles right back inside guard. 10-9 Jones.

Round 3 – Stallings with the jab and body kick. Another jab as Jones tries to shoot in. Jones shoots in again but it’s stuffed. Ref breaks the clinch and Stallings gets off with some punches and kicks. Jones shoots again, stuffed. Stallings lands a couple more punches and Jones presses him to the cage. Stallings gets free and tees off with more strikes, but for some reason goes back to the clinch and looks for a single. 90 seconds to go and the ref separates them. Big body kick again from Stallings, then a left hand. Right hook from Jones but Stallings grabs a Thai plum and scores with a couple knees. Jones presses him to the cage looking for the takedown. Stallings pounds Jones’ kidney area as he continues searching for the takedown and the bell sounds. 10-9 Stallings. I have it 2 rounds to 1 for Jones, but honestly the first round could’ve gone either way depending on how the judges scored it. Stallings did more damage in round one but Jones controlled the action.

Round 1 – Shamil with solid black shorts. Shamil getting the better of the standup with punches, but Johnson presses him to the cage and looks for the takedown. Shamil turns him around and a point is taken from Shamil for repeatedly grabbing the cage. Right from Shamil. Johnson clinches up and tries to muscle a takedown but is unable. He presses Shamil to the cage and puts some knees to his thighs. Shamil escapes to the center with 90 seconds to go. Shamil catches a front kick from Johnson and tosses him to the ground but he gets right up. Johnson finally gets a solid takedown and takes full mount where he unloads punches as Shamil flails. The ref is forced to stop it.

Round 2 – Couple body shots from Gray. Leg kick from Yakovlev and Maynard times the takedown perfectly. Yakovlev gets to his feet but Maynard sticks to him and puts some knees to his thighs. Yakovlev gets free. Leg kick Maynard. Clinch, knee to the body from Yakovlev. Right hook from Maynard. Right hand from Yakovlev. Gray goes for a single but is unable to complete it. Nice straight left from Yakovlev drops Maynard. Gray tries to recover by going for the takedown but Yakovlev stuffs it and rides Gray’s back, landing punches. Gray now on his back, gets to his knees and looks for a leg before the bell. 10-9 Yakovlev.

Round 3 – Gray shoots, stuffed. He goes for it again and gets Yakovlev to one knee, but he’s right back up and gets some distance. Gray pushes him to the cage but is unable to complete the takedown. They square up again. Interesting that Yakovlev, despite his reach and height hardly uses a jab. Still, Yakovlev is able to land a couple more stiff left hands and deny Gray the takedown. Yakovlev gets his own takedown with a trip with under a minute left in the fight now. Yakovlev finishes the round on top of Maynard. Gray raises his hands and seems to feel he’s won (or is at least trying to convince the judges.). But I’ve got the round 10-9 for Yakovlev and the fight 2 rounds to 1 for him.

Round 1 – Carmouche with a leg kick, slips and goes for a takedown but it’s stuffed. Back to the feet, Murphy puts her against the cage, underhooks and landing knees, looking for the takedown. Carmouche goes for a hip toss but is unable to complete it. Ref separates them. Carmouche showing some good head movement, scores with a leg kick, then a front kick. Body kick. Murphy trying to land punches but can’t get her range. Carmouche effectively counter-striking. Liz with a leg kick. Clinch from Murphy, presses Liz to the cage. Murphy completes a takedown before the bell. 10-9 Murphy.

Round 2 – Right from Carmouche, and a leg kick.  Murphy pressing forward. Body jab from Murphy, then she goes for a takedown but it’s stuffed and she pays for it with a knee from Carmouche. Murphy presses her to the cage with a body lock as she searches for the takedown. Ref separates them. Inside leg kick and a right from Liz. Front kick follows. But Murphy continuously backing her up and she presses Liz to the cage. Liz goes for a trip but ends up on her back with Murphy inside her full guard. Liz lands a nice right off her back. 10-9 Murphy.

Round 3 – Leg kick Murphy. Takedown from Carmouche. Murphy gets to her knees as Liz tries to keep her down. Murphy is back up with a body lock and presses Liz to the cage. 2 minutes to go. Liz goes for a hip toss but loses position and Murphy is right back up with the body lock and looking for her own takedown. Murphy gets Liz down but she’s right back up and Murphy sticks to her with the body lock. Liz with a solid trip takedown to side mount with just 10 seconds to go. 10-9 Carmouche.

Round 1 – Couple nice right hands from Poirier in a fire fight. Arm drag from Poirier but Ferriera is right back up and puts Poirier to the cage looking for a takedown. Poirier turns him around then backs out, landing more punches. Ferriera fires back landing punches of his own. Poirier takes a kick to the groin and a brief time is called. Big leg kick from Poirier. Ferriera backs him to the cage by landing punches. They separate and exchange some strikes before Poirier drops him with a straight left. Ferriera goes for a takedown but ends up on bottom Poirier lets him up and ends him with several big punches. Welcome back to 155 pounds Dustin Poirier.

Round 2 – Nice right from Guida, leg kick and takedown. Peralta gets to his feet but is still being pressed to the cage by Guida as he fights for a single. Ref separates them. Uppercut from Peralta. Low kick. Guida shoots and presses Peralta back to the cage. A right hook from Peralta early in the round has opened a cut on Guida and he’s bleeding pretty good. Guida still looking for a takedown. Ref separates them again. Leg kick Peralta. Right counter from Guida. Nice leg kick from Peralta. Guida shoots, stuffed. 10-9 Guida.

Round 3 – Nice left from Peralta. Guida scores with a head kick. Right to the body. Guida times a perfect double leg. He then picks him up again and slams Peralta in the center. Guida on top in half guard, moves to full mount and is looking for an arm triangle. Peralta struggles and gets free of the choke. Under 2 minutes to go. Guida moves to side mount. Peralta gets to his knees, then feet. Guida looking for the single against the cage. Peralta putting elbows in his back and side of the head. Guida picks him up again for another slam. This has been total domination by Clay Guida and he honestly looks better than ever. His changing up his training and getting new looks from Team Alpha Male and Edmond Tarverdyan have really paid off. 10-9 Guida.

Round 1 – Pena comes out swinging heat, Dudieva picks her up for a slam but Pena is able to land on her feet. Pena presses her to the cage but Dudieva gets a trip takedown. Pena is able to get to her feet and take Dudieva down and immediately takes full mount. Pena unloads with punches and elbows from the mount. Dudieva blocking a lot of shots but Pena is still landing plenty. Dudieva gives up her back, but then it’s back to full mount with 1:20 to go. Big elbows, hammerfists and punches and the ref is forced to stop it.

Round 1 – Clark presses Chiesa to the cage. He lands a right on the break and Chiesa also lands a right hook. Clarke presses him to the cage again looking for the single. Body kicks from both guys after they separate. Judo trip from Chiesa but Clarke is right back up and presses Chiesa to the cage. Another trip takedown from Chiesa but Clarke is right back up. Chiesa snaps Clarke’s head back with a punch combo. Chiesa presses him to the cage but Clarke turns him around. They trade knees but Chiesa gets another trip takedown, takes Clarke’s back with a body triangle and he’s looking for the choke. You don’t want Chiesa on your back. Just under a minute to go as Chiesa tries softening him up. Chiesa goes for an armbar, then returns to the body triangle and back control. 10-9 Chiesa.

Round 2 – Leg kicks from Clarke. Another. Flying knee attempt from Chiesa and Clarke pushes him to the cage looking for a single. Ref separates them. They trade punches and Chiesa pushes Clarke to the cage with underhooks. Clarke turns him around but Chiesa gets the trip takedown, then body triangle and is looking for the choke with just under 3 minutes to go. Chiesa stays on his back the remainder of the round. 10-9 Chiesa.

The crowd boos the decision and Al Iaquinta asks, “Are you booing me?” He then goes off and Fox Sports 1 has to bleep out the rest of his remarks. Jon Anik wants to talk with him but he’s done. I like this guy. It was a great fight and he should not be booed. Boo the decision if you want but he fought his heart out.

Round 1 – Leg kick Mendes. Leg kick Lamas, then Mendes, then Lamas again. Mendes ducks into an uppercut. Nice leg kick from Lamas. BIG leg kick from Lamas. Mendes trying to get inside with feints. Jab from Lamas as he keeps his distance. Big right hand from Mendes hurts Lamas. Mendes goes for the kill and lands a knee. Lamas looking for a leg but Mendes is all over him as Lamas turtles up. Mendes gives him a big left under the arm to the chin, he looks at the ref as if to say, “he’s done” and the ref obliges and stops it. I don’t think he was out, but he also wasn’t arguing.