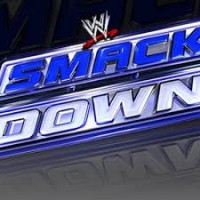 Thursday’s SmackDown from Kansas City will feature a gauntlet match between all six of Bad News Barrett’s Intercontinental Title contenders. Roman Reigns is on the docket. Sting came to Randy Orton’s aid Monday Night on Raw to deal with The Authority, but what will be the repercussions? Monday it was Nikki Bella vs. AJ Lee, tonight it will be Brie vs. Paige, but you can bet Nikki and AJ will both be close by. Also, WWE will hold its first-ever “6-Being Interspecies Match” as Los Matadores and El Torito take on Tyson Kidd, Cesaro and Nattie.

* Roman Reigns opens the show to talk about his upcoming match at WrestleMania 31 with Brock Lesnar but is interrupted once again by Mark Henry. Henry says he got what he deserved from Reigns Monday night and he’s actually betting all his money on Reigns to beat Lesnar.

* Seth Rollins interrupts Henry and says security has sealed the building and Randy Orton will not be allowed in tonight. Rollins says he’d like a WrestleMania tune-up and Kane adds that he and Rollins will face Reigns and Henry tonight.

* Intercontinental Title Contenders Gauntlet Match — Ambrose pins Stardust. Stardust works Amrose over after the match but R-Truth comes out to help and runs Stardust off. They ring the bell but Truth has to deal with Stardust again and he turns around to a Dirty Deeds from Ambrose and the pin.

* Intercontinental Title Contenders Gauntlet Match — Luke Harper comes out to face Ambrose next. Harper ends him with a clothesline and power slam. Daniel Bryan faces Harper next. After getting suplexed on his head, Bryan is able to submit Harper with a heel hook.

* Intercontinental Title Contenders Gauntlet Match — Dolph Ziggler faces Bryan next. After several near-pins both ways, Ziggler finishes Bryan with a Zig Zag. Barrett comes in and takes a cheap shot at Ziggler and works over Bryan reminding them who the champ is.

* Seth Rollins, Kane, J&J Security vs. Roman Reigns (Mark Henry is seen passed out face first backstage so Reigns is all alone) — After taking out J&J and Rollins, Reigns with the Spear on Kane and the pin to win. After the match while Rollins is left standing in the ring, Randy Orton comes out and cleans house.