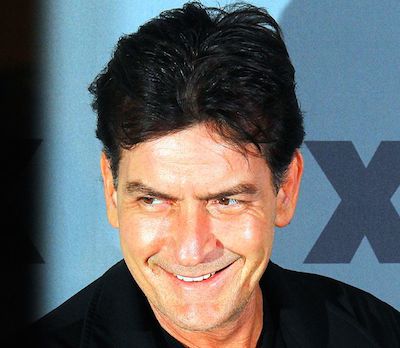 Charlie Sheen went on an incredibly epic rant aimed at famous for being famous Kim Kardashian early Tuesday morning, telling her to go “f yourself” for reportedly crushing a little girl’s dreams of meeting her. Sheen said a friend of his, probably high as a kite we are guessing, told him about a sweet little 6-year-old girl who absolutely worshiped the attention whore known as Kim Kardashian and excitedly asked her for her autograph.  Kim apparently turned the kid down flat out dismissively like the beeatch we all know her to be.

Sheen stated,  “She (little girl) cries about it every night before she goes to sleep.” Imagine your kid finally meeting someone they idolize and then getting rejected by them. Now imagine how pissed off you would be if it was rude and dismissive. Kim K and Kanye may be the two worst celebrities on earth by most accounts. Delusional, douche baggy, self-absorbed, narcissistic, and arrogant a-holes. Sheen in typical form flips out shortly after saying, “You are lucky that ANYONE cares about your gross and giggly bag of funk you dare call an ass.”He next dares her to compare resumes with him, and then slams her further: “Your public loves u. give something back or go f yourself.”Then he goes after Kanye! “My apologies to your hubby, great guy I’m sure, I hope his vision returns one day.”He signs it simply “c”…Sheen then deleted the post a short while later.