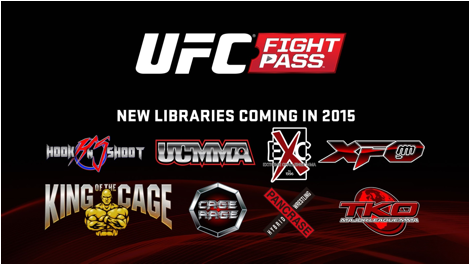 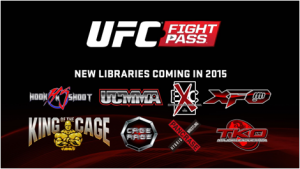 The world’s largest mixed martial arts fight library is going to get a whole lot bigger in 2015.

UFC’s Chief Content Officer Marshall Zelaznik said: “When we launched UFC FIGHT PASS one year ago, we said that it would keep getting better and better and would offer fight fans unrivaled value for money. We believe we’ve delivered on that promise yet again with this exciting announcement that these major fight libraries will be coming to FIGHT PASS.”

The new libraries will join those of the WEC, Strikeforce, WFA, PRIDE FC, EliteXC, Affliction, Invicta FC and of course UFC on UFCFIGHTPASS.com.

Zelaznik said fans will begin to see selected content from these new libraries added to the FIGHT PASS service in the spring, with content uploaded throughout 2015.

He said: “When we are finally done ingesting all these new libraries, we expect to be offering our members access to over 13,000 fights from all over the world and across and the entire history of our sport. That’s an astonishing 6,500 hours of archived fights on top of all the interviews, documentaries, original programming and live fights we have on UFC FIGHT PASS.”

The new fight archives will include:

·      UCMMA – the successor to Cage Rage Championships, UCMMA features some of the best British talent including the early bouts of Jimi Manuwa, Tom Watson and Brad Pickett.

·      Hook N Shoot – A US based group which ran from the mid-1990s to 2011 and boasted appearances from future UFC fighters like champions Jens Pulver and Frank Mir, contenders including Antonio Nogueira and female pioneers including Miesha Tate.

·      TKO – This Canadian league ran from 2000 to 2008 and served as a proving ground for the best Canadian talent including Patrick Cote, Sam Stout and Mark Hominick and Georges St-Pierre.

Further details will be announced in the coming weeks and months.