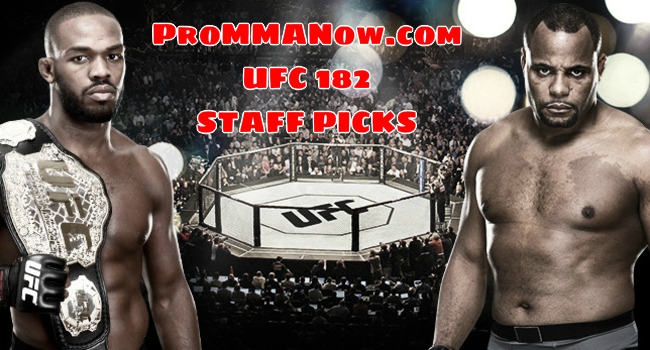 I can’t believe we had to wait a whole three days for the first UFC event of 2015! Sometimes you save the best for last but in this case could it be saving the best for first? However it is that you see it tomorrow night we get that epic match up betweetn Jon “Bones” Jones and Daniel Cormier. I for one have totally bought into the hype and think this fight may be what the UFC needs to steer the ship in a positive direction for the new year.

Looking beyond the main event we have “Cowboy” Cerrone in a fight against a super talented youngster in Myles Jury. Very worthy of the co-main but let’s be honest, was probably a Fight Night headliner in 2014. The undercard excites me with guys like Cody Garbrandt and Paul Felder.They are both underdogs but are both very capable of being stars.

The crew here at PMN has assembled and I am proud that we all chimed in on this event. Our staff made huge improvements to our presence in 2014 and we couldn’t do what it is that we do without Sean McClure, Tyler Saito, Dr. Rhadi Ferguson and our go to in the clutch Mr. Kelvin Hunt. PMN founder Jack Bratcher and I would like to thank the whole crew and each of our readers for everything. Here’s to a big 2015 and here is our UFC 182 picks.

@PROMMA – Josh Burkman makes his UFC return after slumming it on the regional circuit then going 4-1 in WSOF. I can’t imagine what Burkina is bringing to the table that Lombard hasn’t faced. A stick and move game may be your best bet against Lombard. I don’t see Burkman being able to submit the tank that is Lombard. Did you know that “hector” means a braggart or bully? Now you know. The bully wins. Pick – Hector Lombard

@GaryThomasMMA – Unlike Jack, I think Burkman could submit Lombard. I mean he submitted Jon Fitch right! That being said , that is the only shot Burkman has. I like that he’s back in the UFC but as a re-introduction, Hector Lombard is not the guy you wanna fight. Lombard at 170 has totally changed my mind on the fella and while I think he lacks what it takes to be the champ at the moment, he’s gonna give them hell. Pick – Hector Lombard.

Jack Bratcher – 14-1 Flyweight Kyoji Horiguchi meets 6-3 Louis Gaudinot. Horiguchi has looked very impressive in his 3-0 run in the UFC so far. A unanimous decision over Darrell Montague in his UFC debut is enough for me to pick Horiguchi. Pick – Kyoji Horiguchi

Gary Thomas – Not sure how they slipped this onto the pay per view portion. I would assume it’s an attempt to build up Horiguchi. The division lacks real depth and maybe they are priming Kyoji for a title run? I like Gaudinot but I don’t see him having much of a shot in this fight. Pick – Kyoji Horiguchi

Jack Bratcher – Marquardt either looks like a world beater or he fails to show up at all. Tavares has dropped his last two to Yoel Romero and Tim Boetsch. Those are tough dudes. Marquardt submitted James Te Huna back in June to end a three-fight losing streak. Taking Marquardt due to his high level experience and ability to finish. Pick- Nate Marquardt.

Gary Thomas – I like both of these guys. Tavares was on quite a roll and of course we know about the story of Marquardt. Brad has dropped two in a row and my big question is how he mentally prepares for the outcome. Losing sucks and he’s felt that sting while Marquardt was super impressive in his last showing. I like Marquardt to get the better of Tavares in this one but wouldn’t be surprised if Brad pull it out. Pick – Nate Marquardt.

Jack Bratcher – Jury is a great up-and-comer but has never faced the likes of Cerrone. This fight is too big, Cowboy is too jacked right now flying planes, skimobile racing, and god knows what keeping his adrenaline at full blast. This dude is a real life Chuck Norris. Oh wait, Chuck Norris is real. You know what I mean. I wanna see Cowboy and Chuck fight! Chuck wins this one. I mean Cowboy. Pick – Donald Cerrone.

Gary Thomas – I concur with JJ Bratcher. This fight is huge and it probably means more to Cerrone in the scheme of things. Yeah Jury is on fire but having your signature win be Diego Sanchez who is on the downhill side of his career isn’t saying alot. I think Jury can give Cowboy fits but when it comes to laying cash money down, bet Cerrone. Pick – Donald Cerrone.

Jack Bratcher- While my MMA brethren Dr. Rhadi and Pat Miletich think Cormier is gonna take this one, I’m not so sure. Cormier doesn’t have much experience at light heavyweight, against faster guys. Jones is quick, long and strong and uses his reach very well. Cormier is going to have to get inside on Jones, get him down and hold him there if he’s to win this fight — or possibly finish Jones (submission or TKO). Crazier things have happened. I don’t see him knocking Jones out on the feet. Jones is so creative and unpredictable and he’s constantly progressing. I’m guessing that beating he took (and gave) against Alex Gustafsson has only caused him to want to get better more than ever. It showed him the holes he needs to fill. The mental game in this fight is quite interesting as Cormier does seem to be in Jones’ head. This is a great fight. This is why we watch MMA, these kind of fights. Pick – Jon Jones.

Gary Thomas- Talk about torn. I want Daniel Cormier to win. I am a fan of both he and the champ. I just don’t think he’s gonna be able to deal with the movement of Jones. Do I think Cormier will get some takedowns, yes. Do I think he can keep Jon down, no. Striking has to be on the side of Jones. We’ve never seen DC beat up. I think Jones can beat him up. It’s an epic matchup and I see this fight happening a few more times regardless of the outcome. Pick – Jon Jones #andstill