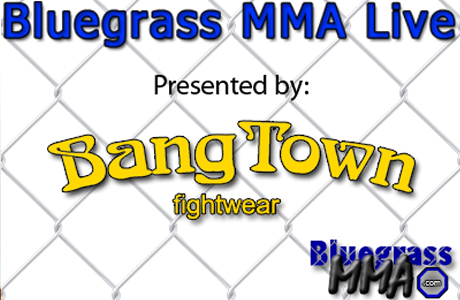 This weekend will be one of the last busy times of the year as many promotions start to close the book on 2014. Tonight on BluegrassMMA Live we try to bring a little bit of them all to the table. Tonight’s show is sponsored by Bangtown Fightwear and MMA Somnia.

Trotters Legacy MMA brings MMA back to Prestonsburg Saturday night and in the main event Josh Stepp will return to action. Stepp has been running a successful gym in Morehead and has put competing on the back burner until now. Josh joins us to talk about the fight and what it means to compete in Eastern KY.

Will Hendrickson has taken some time off but will be back at it in Florence this Saturday night at Turf Wars 22. Hendrickson is the former Hardrock MMA middleweight champ but hasn’t competed since early 2013. Tonight Will will discuss his return and maybe even call out some potential opponents that he’d like to dance with during his comeback.

Chico Bays will get another shot at making his professional debut under the IT Fight Series banner Saturday night in Columbus. Bays has not had much luck but it appears everything is a go for his return. Chico returns to the program to talk about the fight and more.

Khama Worthy is making his seventh straight appearance in the Pinnacle FC cage. Worthy has won five straight and is looking for number six but standing in his way is a tough Matt DiMarcantonio. Khama will surely have something to say about this fight and where he feels he stacks up on the MMA scene.

Dustin Parrish will close things out tonight. Parrish will fight Friday night in Indianapolis at LFC 55. We will catch up with Parrish and see what he’s been into since making his professional debut.

As always, tonight’s episode of BluegrassMMA Live kicks off at 9 p.m. ET (6 p.m. PT) and you can listen live  by going to our page on BlogTalk Radio at www.blogtalkradio.com/prommanowradio where you can participate in the chat room by interacting with other listeners or submit questions for our guests. Listeners can also call the show at (347) 884-9986 if you have a question or a topic you would like to discuss.

You can always catch the podcast on iTunes, Stitcher Radio, LiveSportsCaster.com or listen to it on the go by downloading the ProMMAnow.com APP for Android or Apple.