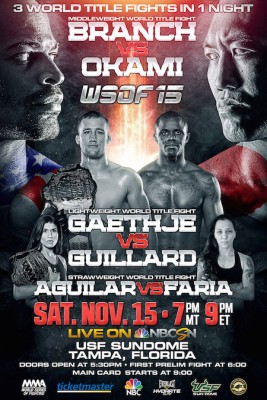 WSOF 15 takes place this evening from the USF Sun Dome in Tampa, Fla. and is headlined with a middleweight title fight with Dave Branch putting his belt on the line against former UFC top 185-pound contender Yushin Okami. In the co-main event, Justin Gaethje was scheduled to defend his lightweight title against Melvin Guillard, but Guillard missed weight and the bout will now be contested at a catchweight of 159 pounds (non-title fight). Also, women’s strawweight titleholder Jessica Aguilar defends her belt against Brazilian badass Kalindra Faria. WSOF 15’s four-fight main card airs live on NBC Sports Network starting at 9 p.m. ET. The seven-fight preliminary card will stream on MMAjunkie beginning at 7 p.m. ET. PMN (www.prommanow.com) will provide live results for tonight’s fights.