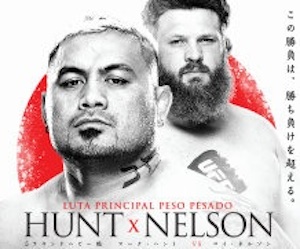 Whether you are a betting person or not, it’s always fun to look at the gambling odds on cards with big names such as the case with UFC Fight Night 52 taking place Saturday in Japan. Hands of steel and chins of granite power couple Mark Hunt and Roy Nelson will try and beat the life out of one another in the main event. Interestingly, Hunt comes in the slight favorite, and probably justifiably so, although some of that is due to the remarkable four-fight run he had back from 2011-2013 when he defeated Chris Tuchscherer (KO), Ben Rothwell (UD), Cheick Kongo (TKO) and Stefan Struve (TKO).  Since then though, Hunt got knocked out (spinning hook kick) by Junior Dos Santos in May 2013, and fought to a draw with Antonio “Bigfoot” Silva last December in what has been called the “greatest heavyweight fight in UFC history”. So, should he really be the favorite against the always formidable Roy Nelson?

Let’s not forget at one time Hunt had lost six fights in a row, including his UFC debut in 2010 against Sean McCorkle, in which he got submitted. In fact, he got submitted in five of those six fights. Nelson does have a submission game, but let’s be honest, we don’t wanna see this go to the ground.

“Big Country” is coming off a first round knockout victory over Antonio Rodrigo Nogueira back in April. Prior to that he’d dropped back-to-back decisions against Daniel Cormier and Stipe Miocic, both in 2013. But before that he was looking like a world beater, having knocked out Dave Herman, Matt Mitrione and Cheick Kongo, all in a row. At 20-9, Nelson has a much better overall pro MMA record than Hunt’s 9-8-1. Both have big power and one punch can end it. Nelson has a big ground advantage but chances are it’s not going there. If I had to lay money on this fight, it would go on Nelson, I’d pick the dog.

There’s one other fight on this card that really interests me and that is Rin Nakai vs. Miesha Tate. Nakai is the underdog at +230, with Tate coming in at -270. Nakai (if you’re not familiar with her, read this) is undefeated at 16-0, most recently defeating Tara LaRosa and Sarah D’Alello, both by decision. The Pancrase champ is built like a tank and is strong as an ox, and while she hasn’t been fighting the same level of competition as Tate, wins over D’Alello and Larosa are legit victories.

Tate snapped a two-fight skid in April when she defeated Liz Carmouche via unanimous decision. “Cupcake” should enjoy a stand-up advantage, but if Nakai gets her hands wrapped around Tate, all bets are off. Tate’s specialty is her ground game but how will she fare against the power of Nakai? Tate is a tall order for anyone, especially for a girl making her UFC debut, but if I were a gambling man, I’d lay a few bucks on the female freight train known as Rin Nakai.

Let’s hear your picks. Sound off in the comments.