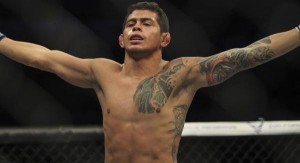 It was a solid lightweight matchup between Ramsey Nijem who is coming off a performance of the night outing and Carlos Diego Ferreira . Ferreira is back in the cage after a quick submission of Colton Smith back in June.

The fight started off fast with Nijem trying to establish his striking game and avoid the submission skills of Ferreira. Nijem looked sharp but so did Ferreira. Ferreira had Nijem in a bad spot against the cage as he was working for a kimura but Nijem escaped and survived to the second round.

The undefeated Carlos Diego Ferreira made the second round his as he was on point early. Nijem pushed forward trying to force the action but got caught with a huge shot. Nijem went down and Ferreira followed. He was able to unload on Nijem and force Herb Dean in to stop the fight.

Carlos Diego Ferreira  stays undefeated and showed that he is dangerous on the ground and now in the striking game.

The action rolls on and we have you covered with blow by blow coverage here. Following the event you can watch the press conference by clicking here.