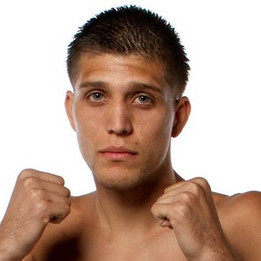 Here we go again. It’s getting hard to keep up with just how many UFC fighters have been getting popped lately for performance enhancing drugs (PEDs).

The latest casualty is featherweight Brian Ortega (8-0, 1 NC), an RFA transplant, who made his UFC debut in July when he submitted Michael De La Torre at UFC on FOX 12. That win has now been overturned to a No Contest.

The California State Athletic Commission revealed the results of Ortega’s test to Sherdog.com on Friday. As a result, Ortega has been suspended for nine months and fined $2,500. … He may file an appeal with CSAC within 30 days.

All 24 fighters competing at UFC on Fox 12 provided urine samples that were sent to a UCLA Olympic analytical lab that is World Anti-Doping Agency (WADA) accredited. All the specimens — with the exception of Ortega’s – came back negative.

This news comes on the heels of former UFC welterweight champ Georges St-Pierre saying he will NEVER return to the UFC unless PED testing is done by a credible independent anti-doping organization like VADA or USADA under the strictest standards of the World Anti-Doping Association (WADA) Code.

It’s good to see more guys are getting caught. That’s the good news. But how many are still getting away with it and what more can and will be done?

Take a look at other UFC fighters who have recently been busted for steroids and/or PEDs.
[ads1]
[ads2]