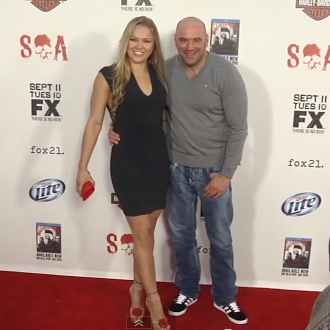 UFC President Dana White and UFC women’s bantamweight champ Ronda Rousey took part in a Q&A for media members and fans this week in Macau, China, where “UFC Fight Night 48: Bisping vs. Le” takes place on Saturday. The duo discussed such topics as Ronda fighting Cris Cyborg, Gina Carano, what it was like for Ronda working with Sylvester Stallone and the rest of the Expendables 3 cast, judo, and if Ronda thinks she’ll ever win a fight faster than when she beat Alexis Davis in 16-seconds. White also discussed the recent signing of Eddie Alvarez and his upcoming Octagon debut against Donald “Cowboy” Cerrone, as well as the future of UFC and mixed martial arts (MMA) in China.

The Chinese fans also seemed partial to questions about Pokemon, knowing the UFC women’s champ is a huge Pokemon nerd — in case you didn’t know: