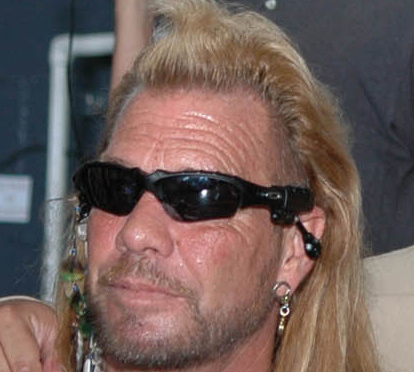 You can run but you can’t hide. Not from this guy. “Dog The Bounty Hunter” (Duane “Dog” Chapman) don’t play son. This is the guy who travels around the country showing bondsmen how to track down criminals who jump bail. This is what he does. He got the nickname “Dog” because he has a keen sense of smelling out where the lowest common denominator of our society hangs out and hides.

War Machine (Jon Koppenhaver) has been on the run since last Friday in connection with a domestic violence incident against ex-girlfriend Christy Mack in Las Vegas.

Dog’s first warning for War Machine to turn himself in came out late last night. As of this afternoon Koppenhaver’s final hours are ticking down.

.@WarMachine170 better 2Give All You Excuses To The Judge ..you got 24 hrs to turn your self in or I am Coming After YOU.!#CMTDogAndBeth

@WarMachine170 your now In my World your a FUGITIVE & I Am a BOUNTY HUNTER !! YOU NEED TO FEEL SHAME !! Be a MAN SURRENDER TO AUTHORITIES

@WarMachine170 Hey Boy This half breed Chiricahua Apache is on YOUR ASS #Eatmytazer !!

It seems Dog is already sniffing around too:

Not much time left for the man John “Doomsday” Howard calls “Bitch Machine”:

#CMTDogAndBeth War Machine YOU HAVE 6 HOURS LEFT !!SEE YOU SOON !!

Dog responds to some of War Machine’s pals on Twitter:

@SeeJayYMF @WarMachine170 bring it ! I ain’t no woman chump if he is your friend your a SKUM TOO

Baby Lyssa’s even getting involved:

@AlphaMaleSeeJay @DogBountyHunter @WarMachine170 dude your so lame. How about being the good guy and getting your bro some help

1 thought on “‘Dog The Bounty Hunter’ gives War Machine ultimatum: ‘Turn yourself in or I’m coming after you’”