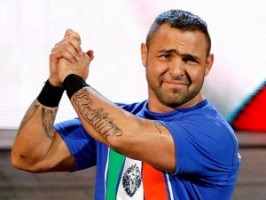 Santino Marella announced his retirement at a live WWE event in Toronto last night in what was described as a half comedic, half emotional speech. According to Lordsofpain.net, Santino told the crowd in attendance that his most recent neck injury occurred a mere three weeks ago.In retrospect, his last WWE TV matches came on June 16th of this year participating in the RAW Money In the Bank battle royal, and then on June 17th in an episode of WWE Main Event match that aired on the WWE Network. His opponent was the juggernaut Rusev who is known for his aggressive in ring style and brutality. Rusev works “stiff” or without pulling punches very much in layman’s terms. It should be noted that Santino has worked a few live events since the. In these appearances he has been teaming up with WWE Divas Emma and Paigereportedly, Santino told fans that he will still be a part of the WWE and humorously teased a possible General Manager role in the future. The WWE has a track record of rewarding superstars who are loyal to the company or sustained injuries while performing for the WWE. The WWE has helped superstars who have drug addictions that came about while in the WWE, too with their wellness program. Attitude era wrestler Droz has been taken care of since he was paralyzed by D-Lo Brown in a botched move.

Interesting to note, Santino is a legitimate mixed martial artist and runs a school specializing in MMA.